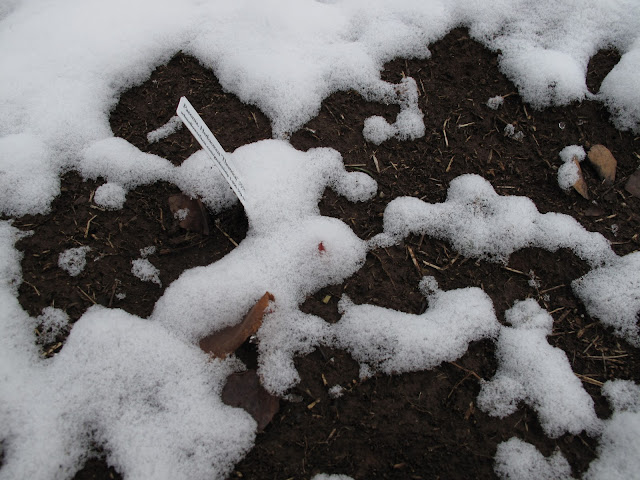 It started snowing right on schedule yesterday, around 10 a.m., just as the National Weather Service said it would.  It still didn't give me enough time to coordinate shooting a picture of my peony bushes bravely pushing up through the ground, so here one is today, peeking through the snow.  It's the teeny, tiny bit of pink you see in the snow.
I woke up this morning with a bad case of Monday, looked out at the accumulating snow and my icy street and emailed my boss.  I could probably have made it to work with no problem, but with no one else in the preserve kitchen today, and not enough jars to make any progress, anyway, I figured a snow day was a good idea. 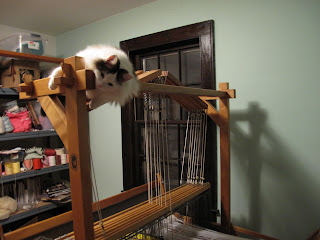 I got an early start on the turned overshot project, with Weftie's help.  I threaded the reed completely yesterday, while watching the snow flakes fly.  This morning, I tied onto the front apron, and spent the next two hours fixing threading errors.  When I spread the threading of a loom over a period of six months, there are bound to be threading errors, and this one was no exception.  The yellow warp threads that I had to add on due to negligent counting were for some reason very tangled in their heddles. 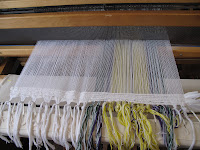 But patience prevailed.  I wove in some toilet paper and started with an inch of tabby for side hems.  And then, the magic began.  Those of you who love overshot do so because watching the pattern develop thread by thread is simply magical.  It's no different with turned overshot, but you only use one shuttle. 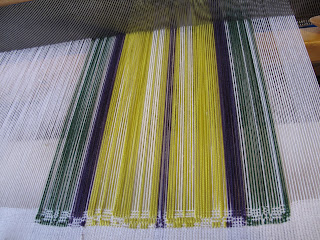 This is just the beginning of the pattern, but already you can see the pattern developing.  I don't mind using multiple shuttles to make overshot, but, as you can probably tell, I'm just fascinated with this technique.  It's part puzzle-solving and part simple weaving.  When I turn a pattern on its side and the treadling becomes the threading and the threading becomes the treadling, it's simply magical, even better when it's successful! 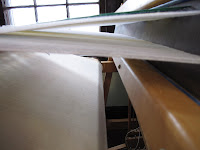 I'm using the 8-shaft Colonial to do this, and, as I mentioned before, I've put the tabby on 1 and 2, rather than the 5 and 6 that Jean Scourgie recommends.  It did make the tabby a lot easier, but now the last treadling in the pattern has a tight squeeze.  It's definitely doable, but I have to throw the shuttle carefully and make sure each time that all the threads stayed on the sides they should have. 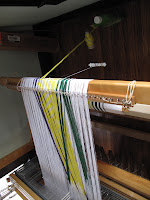 The back is still ugly, but I did use Laura Fry's technique with the bottle, though I used a Cascade bottle.  There was one in the recycle bin, ready to go.  Too soon to tell if I did it correctly, but I'll keep an eye on it.
I realized this morning as I tied up the shafts that I still have yet to use all eight shafts on this loom!  I will have to take a break from my love affair with turned overshot for the next project, and see if I can't try an eight shaft pattern.
This Saturday, I'm hosting the Clinch Valley Weavers' Guild Christmas party.  If you're planning on attending, bring your favorite overshot pattern, some graph paper and a pencil with a big eraser!  I'll  have extras, but bring them if you have them!
Until then, happy weaving!
Maggie
Posted by Tuesday Weavers at 12:39 PM

Oh WOW....I have a page of mini overshot patterns that I use for mug rugs. That would be a great way to try turned overshot without having a LOT of threads to wrestle!!! Great for a beginning project!!! What a wonderful idea!

We should do that at TW as well! I am glas you got a snow day!

Something else to miss - my peony bushes! (They grow here with a lot of coaxing.) Does Weftie ever fall? The project looks beautiful. I'm going to have to read up on this technique. ~Marta