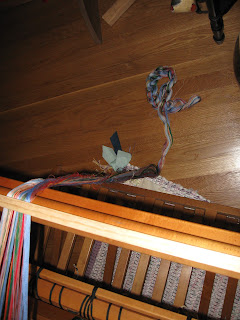 I'm starting to think that my fall in early November might have damaged more than my arm.  Really!  I'm thinking I might have had some trauma to my head, too.  That's the only explanation that I can think of.  Why else would I forget to put the lease sticks in before I put the warp in the raddle????  Yes I did!  I cut the choke ties on my cross and put each group in their spot.  Then the light bulb came on!!!  What have I done!!!

As much as possible I tried to find the cross...the top was easy.  It's a good thing that the scarf is done in color sections.  I just did the best I could.

And, if you had asked me a week ago if I would ever work with fine thread again, I would have said, "NO!"  But, as I'm weaving it up, I like the way it looks.  I don't like the way it wants to twist, though.  I do like the bright colors and all the possibilities that you could create. 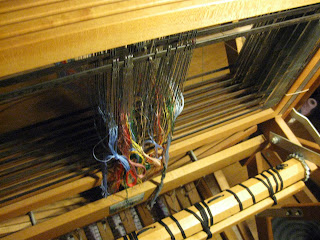 Right now I'm taking a wee break in the hemstitching.  (I think my fall might have affected my eyesight, too.)
So, today I'll be weaving away while the rest of the country runs to the store for milk, bread and TP.  It's two weeks until Christmas, and I have plenty to keep me busy up here on the Ridge.
Besides.....I don't think I can afford another fall.

As a witness to your fall, I must tell you that your head didn't make contact with the sidewalk! But, the jolt might have cause some kind of whiplash-y effect...

Cool Colors! I can't wait to see the scarf! Stay warm and dry!

Nice colors! I am looking forward to seeing the scarf.

Food City was packed with shoppers yesterday afternoon! Guess they all heard about the snow in the forecast. This morning guess what I discovered. We are almost out of cat food and TP. Guess another trip to the store is in order for me!

Whiplash. Sounds like it could be the cause. Good luck on the scarf.

Doesn't have to be physical trauma. The shock can be enough. And you know, everyone makes a mistake or two when their mind is on something else. Fret not. Take it easy. You'll heal.

Oh my, those falls can be nasty even if the damage isn't apparent at the time. I've done this BTW and a few other things to boot. The scarf will be lovely and you will have gained a ton of confidence having had to work it all out. Happy weaving! Some of my favorite weaving times are during snowstorms.