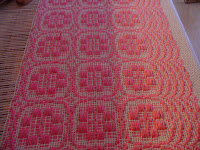 "Kings Flower"  is the second Overshot Pattern that I am using on my Baby Blankets and Couch Throws.  There are several treadlings so I thought I would try some out, and test the squareness of the pattern on this 12 epi cotton warp.

If you look at the pattern right to left, you can see that I added 1 pattern pick each side of the middle pivot point to square it up.  I figured that if it was square on the loom it will be square after washing.  This is treadling number 1.  I thought I had a picture of treadling number 2 on the loom in pink, but I don't. I have some of it after the finishing. 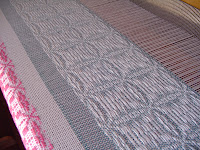 Here is an experiment using a color as the tabby and natural as the pattern pick.  (Here I was using pattern number two.)  It is interesting, but I am not so sure I like it.
After finishing here are the results:
Pattern number one, even when squared with the extra pic, just doesn't inspire me at the moment.  Not for an all over design. 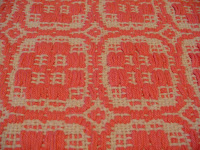 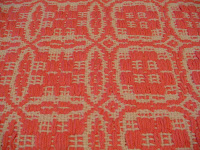 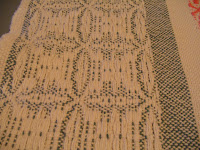 , (to the left) is much more pleasing. I also squared it up and I am pleased to see that after finishing, it stays square.
I do not however like my little experiment!  It looks too much like the store bought afghans that you see in the store!  I think that a natural pattern over a solid colored warp would rock, but you would then be limited to that one color.  Hmm, I suppose if  someone wanted one I could do it, but I would not put on 40 yards of it!  Maybe after I do these longer warps I can do some 5-10yd colored warps, and try it out. 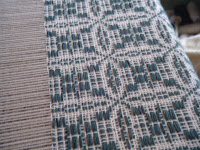 Finally, here is another Couch Throw on the loom in the new "Kings Flower" pattern.  This one is a wedding present, for a wedding tomorrow!
I need to finish this one up today, hem and wash both the kakhi colored throw and this one, and I am going to try to finish the second scarf for the TW scarf challenge.
I better get at it,
Until next time, Happy Weaving, Tina 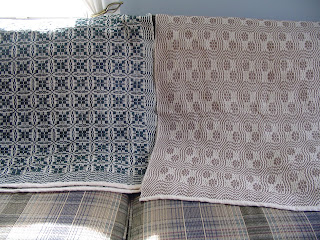 I love the variety!
Posted by Tuesday Weavers at 10:28 AM

Those are all nice. I think that I like pattern 2 also best. It breaks it up a bit. Looks like it would be more fun to weave.

Those look amazing! I love that pattern and you have done a great job! Someone is very lucky to be gifted with these throws!

So treadle 2 is the reverse of treadle one. Wayyy cool! They make awesome, awesome throws/ afghans/blankies! Weave faster!!

That's the pattern I used for my first turned overshot project, the bathroom curtain. I like the way you altered it.

Just beautiful! I like option 2 also. Would love to see the draft and the cat's tracks draft! :)

Can I ask about your boarder for the King’s Flower pattern you used? I’m curious about the threading. Looks great!

Kings Flower is an overshot pattern out of "A Handweaver's Pattern Book" by Margarite Davison. I followed her threading and treading to I think, it has been quite some time since I have woven these.