This post is picture heavy....and it spans Friday, Monday and today.  The Tuesday Weavers were out in force at Convergence! 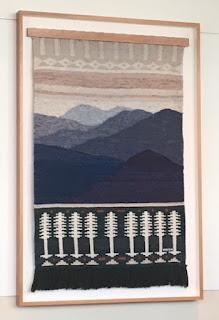 Tina and I arrived around 10 a.m. to the Convention Center Friday morning.  Although I had gotten our Day Passes online on Thursday, they had not made it to the registration desk.  So we waited with the other folks.  I first noticed this piece on the far wall.  WOW!  This weaver really captured the way the Smoky Mountains look.  I ran over to see who had woven this piece and found out it was Betsy Worden!!!  She is a well-known local artist who passed away several years ago.  We were gifted with several of her looms, which is a great honor. 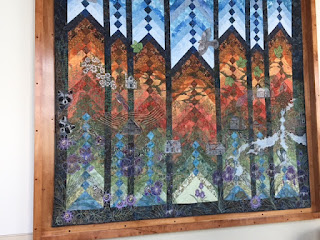 Hanging next to Betsy's piece was this quilt.  I first noticed the little raccoons peaking at the edge.  Then, Tina and I found ourselves playing "where's Waldo" finding the other hidden images.  As the line snaked closer to the quilt, we got more excited finding other features of Cades Cove.  This quilt was stitched by the Tellico Village Quilters.  It sure did make standing in line more fun!!! 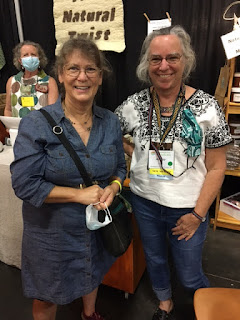 Oh, yes!!!!  That's Tina with Annie MacHale!!!  Of course we both bought her new book, Three-Color Pickup for Inkle Weavers. 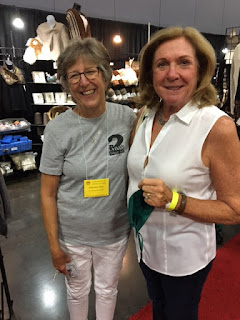 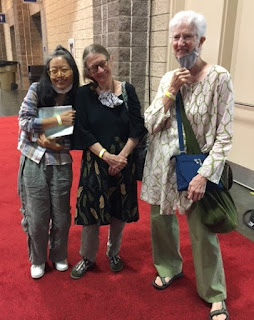 We also saw Laura (on the right) with two of her friends. 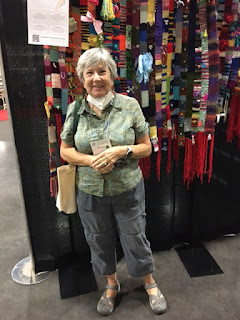 Patty was on lunch break from her class when we saw her.  She's had a grand time! 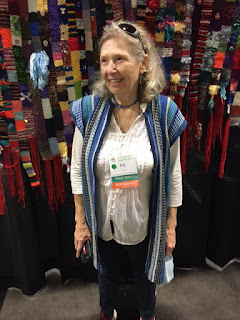 Pat was on lunch break, too!

The tapestry behind Patty and Pat was from the Women's Woven Voices.  There were over a thousand "story boards" from women around the world.  I was honored to meet Brecia Kralovic-Logan, who directed this project.  I guess you just have to sit down at the right table!!!! 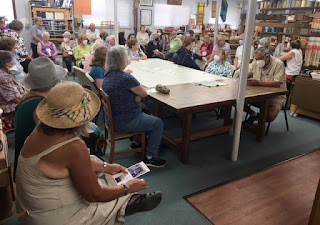 Yesterday, we were one of the stops on the Sounds, Art and History of Appalachia

tour.  Carol gave them a brief overview of the history of the Center, and how the Tuesday Weavers have evolved. 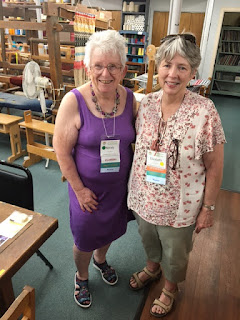 Betsy wanted to make sure her friend met our Sharon to get information on weaving in her part of Florida. 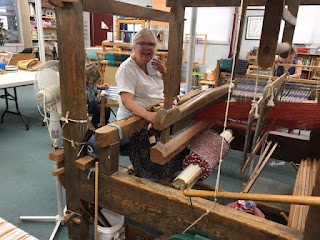 We had some visitors from Convergence today.  Barbara was weaving on the barn loom. 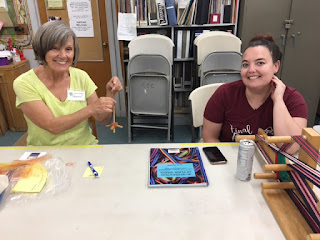 Sharen showed off her little Turkish spindle she got at Convergence.  Liz finished another inkle band! 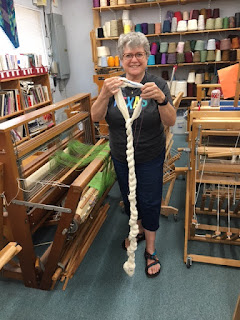 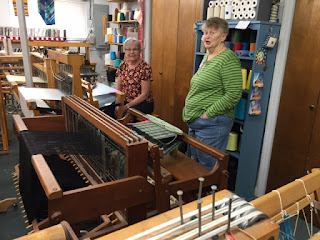 Linda worked on her towel warp, and I got Sharon to help me wind on a warp on one of the Pups. 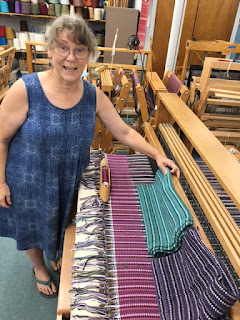 Tina finished her re-threading and tried out some dubonnet weft.  Amazing how the weft color really changes the article!!! 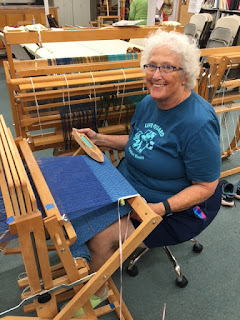 Pearl got back to work on her huck lace piece.

We were few today, but it has been a busy few days. 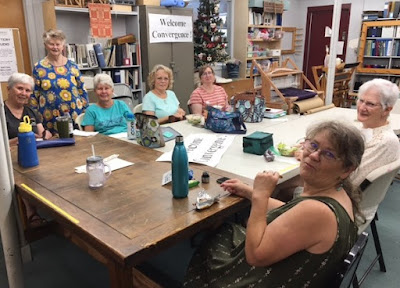 We were a small but mighty crew today.  Lots of things going on in the summertime!

I was busy this morning with my project and didn't take any pictures until we stopped for lunch.

**To be fair, some folks had already left for the day at lunchtime. 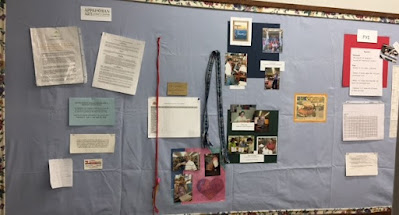 My project was the bulletin board for the weaving studio.  Patty and I got it covered two weeks ago, and we had lots of pictures and information to add.  I'll add more pictures soon.

We are looking forward to meeting the folks on the tour next Monday!!!! 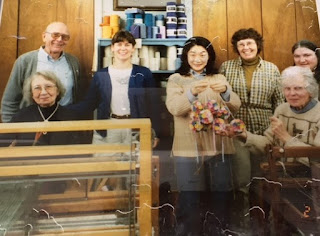 We did find a blast from the past.  Unfortunately, parts of the photo had adhered to the glass when we tried to take it out of the frame.  You might recognize a few of the folks:  at the loom is Dorothy.  Behind her is Carl, then Tina, a student from Japan, Pat, Molly and Grace Foster.  Tina declared that she was in her 40's at this time!!!!

Several of us will be at the Center on Monday to meet and greet the folks on the tour.  We are looking forward to seeing you.

Posted by Tuesday Weavers at 6:43 PM No comments: 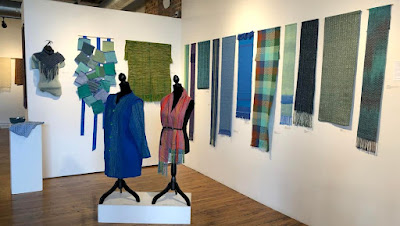 Opening night was Friday, 1 July, at the Emporium Gallery in Knoxville.  This is our part of the exhibit for Convergence.  Just look at all that "blue-green" that makes our Rivers and Ridges exhibit!!!

Take a closer look at our mug rug collage.  Carol named it "Abrams Falls" which is a popular place in the Smoky Mountains.  Each mug rug is unique. 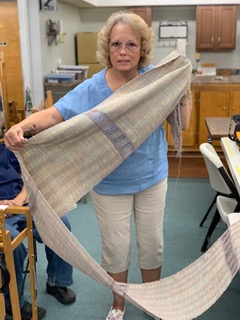 This is Ruth's second warp:  placemats!  She made a show of cutting off the warp this afternoon!  Now, on to the next project. 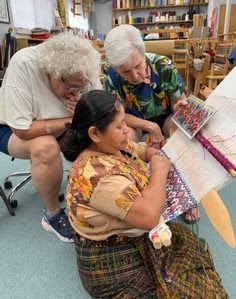 Our weaving friend from Guatemala, Olivia, came back today to show us her progress on her warp. 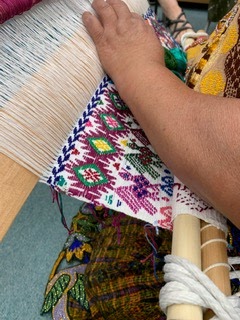 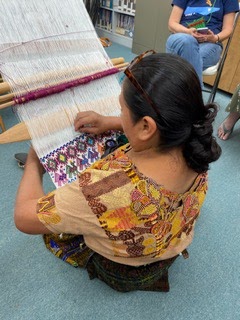 We really appreciate her sharing her talent with us. 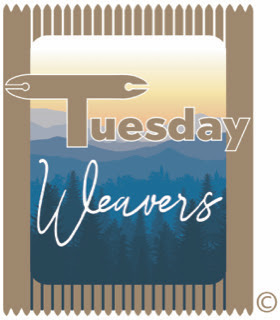