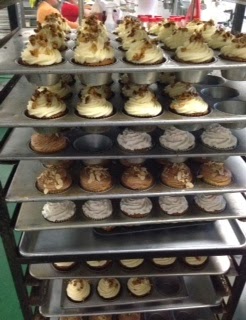 I missed my blog post last week, because, well, I was tired.  I really, truly meant to, and I, well, I fell asleep.  I got a promotion at work--yay!--but it means I work more hours, and I have more responsibility, and so, when I get home, I fall asleep sometimes, without blogging, even when I have stuff to write about.
I make more cupcakes, make more bread, make deposits, call customers...you get the idea, and here's the photo to prove the cupcakes.  Yes, they are yummy, and since one of the restaurants has had major renovations, and they finally have the display area for desserts, they sell more.
But enough about work!  What have I done for fun?  I tried to do an Olympic project.  And I had a great one in mind this year, a very interesting shawl pattern that's mostly garter stitch, with a beautiful, knit-on-the-edge lace border, in mohair-silk.  The yarn just didn't work, wouldn't show the pattern and was, well, a pain in the butt, to be honest. 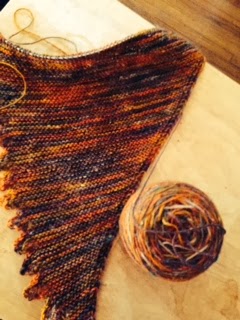 So I switched to some nice sock yarn.  And I got off to a good start!  And I liked most of it.  But watching the Olympics was soooooo boring!  Who cares what the commentators think?  Why don't they ever stop talking?  Why can't they show more sports and less background interviews?
And then, I started to hate the shawl.  Hate is a strong word, but how about dislike?  I don't like it!  The pattern is fun, and definitely made for t.v. watching. I've watched Downton Abbey and Sherlock and HGTV and DIY while knitting it.  But I've dropped out of the Olympics.  No gold for me this year.
I started sewing, though.  I've pulled out old projects and newer projects and stuff I'd like to do after I get some old stuff done.  The first day, I decided to finish up old projects.  I found a purse I'd started in 2003!  A purse made from old jeans and a center panel paper-pieced from quilt fabric I was given as a gift in Montana in 1999.  This is a really old project.  But I only had the shell of a purse, with no lining, the zipper not done and the strap not even cut out. 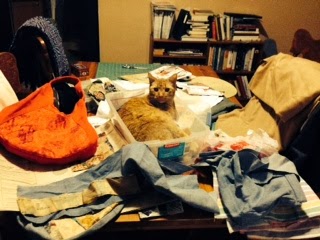 I set to work cutting out the lining and strap and hit a snag.  A cat snag, to be exact.  You home sewers with cats know what I mean.  You get the pattern pieces out, start to cut, go get a fresh cup of coffee, and BAM!  There's a cat right in the middle of your work.  I gently pried Leo off the table and finished cutting. 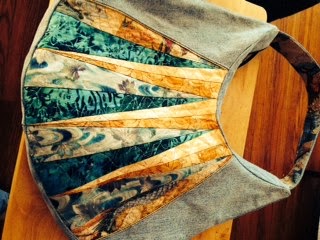 I got the purse done that day, and it made its debut today when LouAnn and I went to brunch.  I love it!  It's flashy and homey at the same time, and it's very roomy.
Then, I started on a jacket from pieces of fleece I had, some I bought, and some from a treasure trove from an estate.  I pulled out all the pieces big enough to cut our parts, started deciding what would go where, went to get a cup of coffee, and BAM!  More cats on the work table.  They're cute, and funny, and amusing, but why do they always have to sit right on the project at hand? 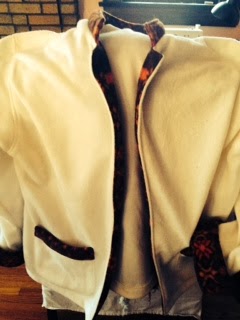 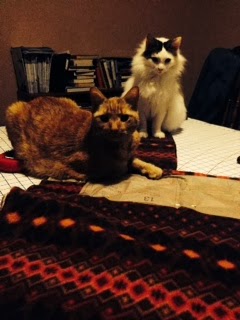 I got the jacket cut out, and have almost finished it.  I don't like the pockets, and will take them off and replace them with slashed pockets, welted in the print fleece.  Then, it's buttons and button holes, and maybe some elastic gather in the back (it's way too big!), and it will make its debut after our warm weather--Yahoo!--this week.
I have gardening plans this week when it is supposed to get into the 70's, and I am so ready!  Enough snow already!  It's been great for the sewing, but not much else.  Even Leo doesn't like to go out in it!
Be sure to set aside your sewing, weaving, knitting, spinning or whatever else keeps you indoors this week and let the sun shine on you!
Maggie

Posted by Tuesday Weavers at 5:26 PM

Your purses have inspired me to dust off my machines. We'll see what I can get done tomorrow!!!