A Day at the Museum of Appalachia

Lou Ann and I made our way to the Museum early this morning.  We both had to stop by the post office on our way, and our friend Mindy sure wanted to come with us to the Museum!  We would have taken her too, but she thought that she had better stay at work after all.  There was a local school field trip scheduled for us today and we love it when we get to talk about our ancient crafts to those youngsters.

It wasn't really very busy today, and every so often, during a lull we would have to go outside to see if we could find the new twin lambs that were born sometime Monday night.  They are coal black, but as they grow that wool will turn a lovely shade of brown.  There are several ewes that seemed to us to be just about ready to have their little ones.  We figured that by the time we go back there on Tuesday for lunch, there were going to be a lot more lambs to enjoy!

Lou Ann brought her inkle loom, and was busy weaving away on her Lady Vols inkle band.  I brought the Double flyer wheel, and some flax on the distaff.  (I also brought the Navajo Spindle and some wool that turned out to be the wrong kind of wool to use with that spindle.  It soon became a prop!)  I first put the wheel together and oiled it really well, then I spent about 5 minutes just treadling.  It is good to let the oil get to all the places it needs to be, and to get my foot accustomed to the rhythm of this particular treadle.

I was soon spinning with both fists as it were.  I can really tell that my skill level is improving.  I was comfortable, and as Lou Ann said, I can spin longer and longer without a mess up.

I did notice that as the flax on the distaff was being used up, there was a lot of fuzzy stuff in there that was making it hard to draft out the fibers.  I went next door to the loom house where they happen to have an old time Hackle that would take care of that problem.  I was amazed at how much stuff was left behind in the Hackle!  I took the good stuff back to the wheel and tied it onto the distaff, like a pony tail.  I soon found that I did not like that kind of presentation.  The flax tended to come out of the ponytail in clumps.  I finally took it down and placed the ponytail under my arm and had a great time spinning from it.  I could only spin to one flyer at a time, but I really liked the yarn I was getting. 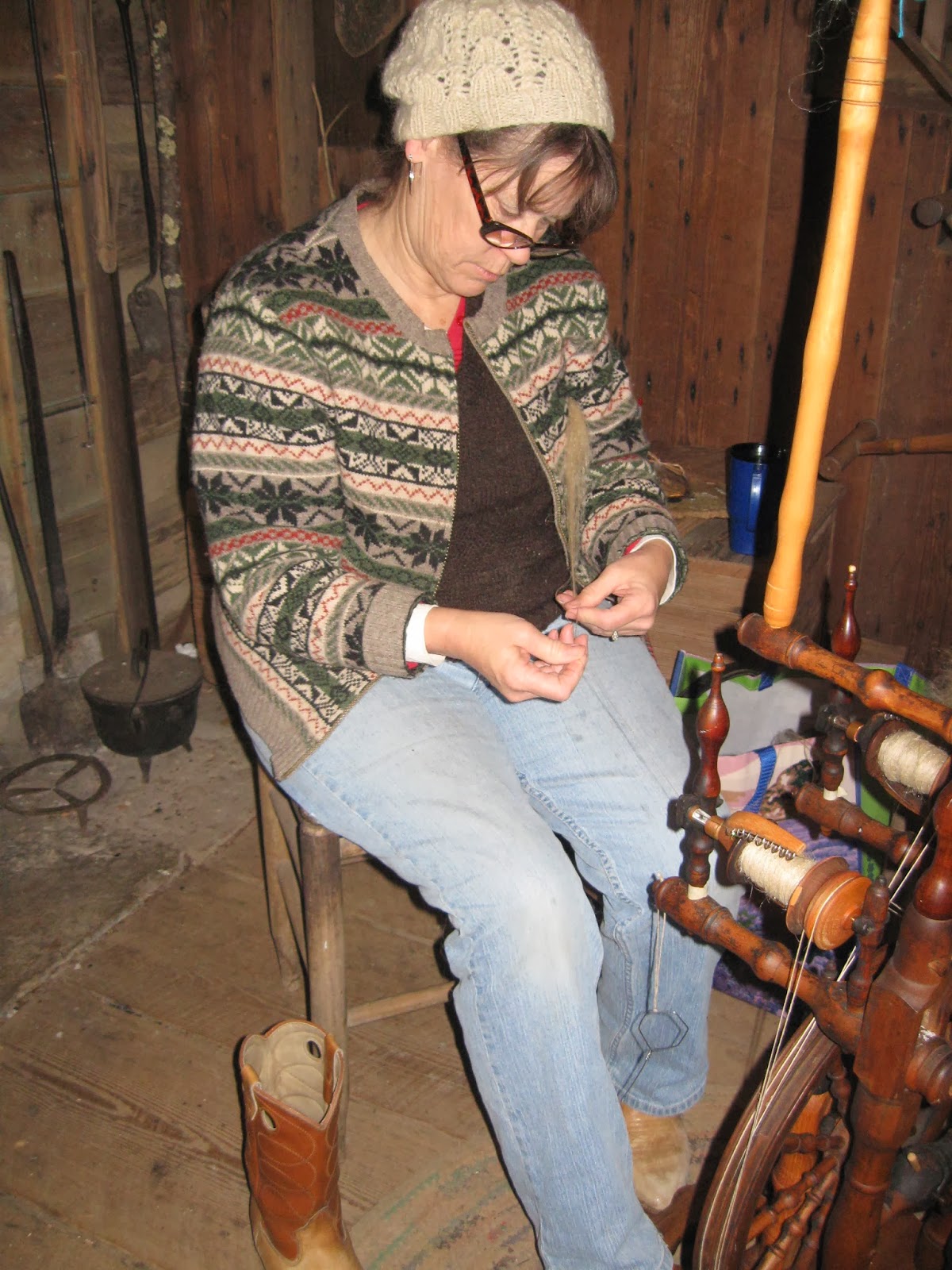 I will continue to train using both flyers, but I think that for production, I may just use one flyer at a time, unless I get really good at it!

Our day was soon over, and we headed home.  I dropped Lou Ann at her house and went to my daughters house to see the grandkids, and also to see some new yarn she had spun up, it was Babydoll Southdown.  I had just ordered 8oz of it a couple of days ago, and when I told her, she reminded me that she had just finished a skein of it, and that I must come to see how elastic the yarn was!  It was amazing!  Almost as stretchy as a rubber band!

I headed home after my long day of fun, and I found a couple of things waiting for me.  That Babydoll Southdown roving,  I do hope you can see the picture of that lamb. 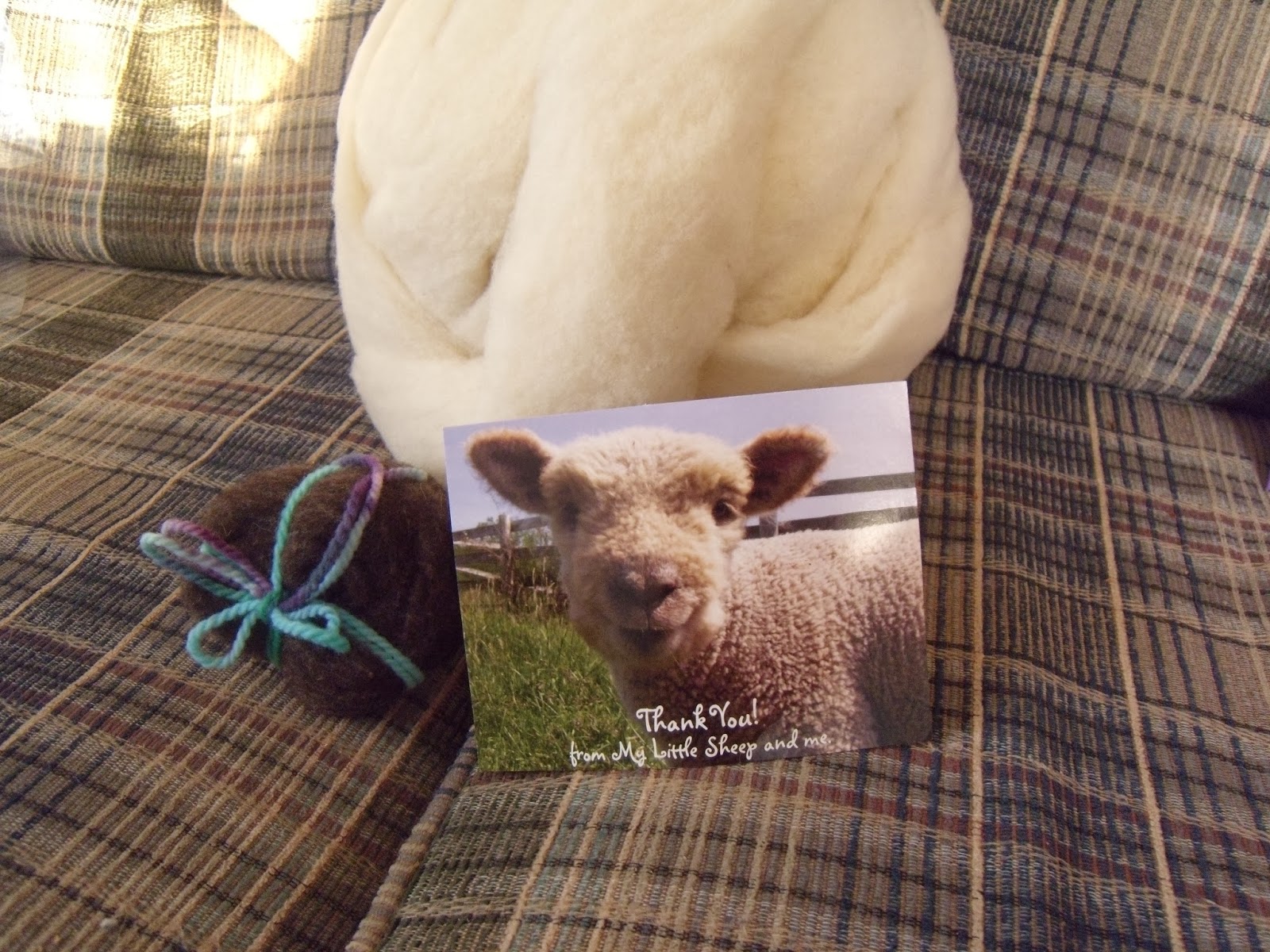 And a book I had ordered last week, to help me with a particular loom/warp problem I have.  It is a book by Kati Meek, and it is called Warp with a trapeze and Dance with your loom.  I will go into more detail about it at a later time, when I have had a chance to put it into practice. 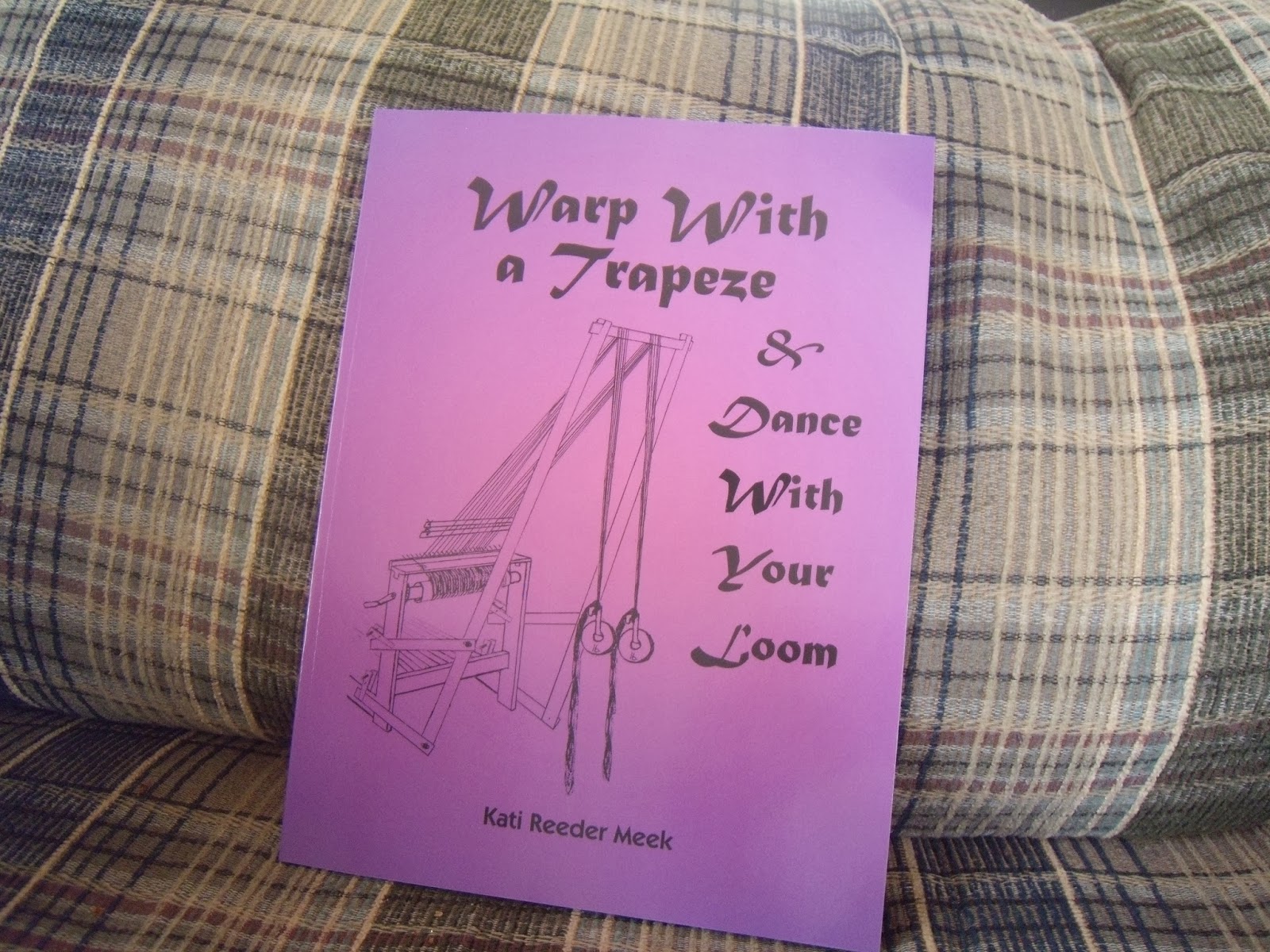 I am plum tuckered out, and it is time to go out to feed my critters.  I hope your day has been as good as mine has.  Retirement is a wonderful thing!

Until next time, Happy Spinning and Weaving, Tina
Posted by Tuesday Weavers at 6:13 PM

We need to get a picture of the new lambs at the Museum! They are just too cute! BTW, the kids all enjoyed watching you spin today!!!

What a great wheel! Wish I could come and have a quick treadle!!