I was clearing my computer desktop the other day, when I realized that I hadn't posted about  the rigid heddle scarf that I did on Lou Ann's Sample it.  I only had it for a short while, but I did keep it long enough to use up some stash yarns, that I haven't been able to get into a project until now. 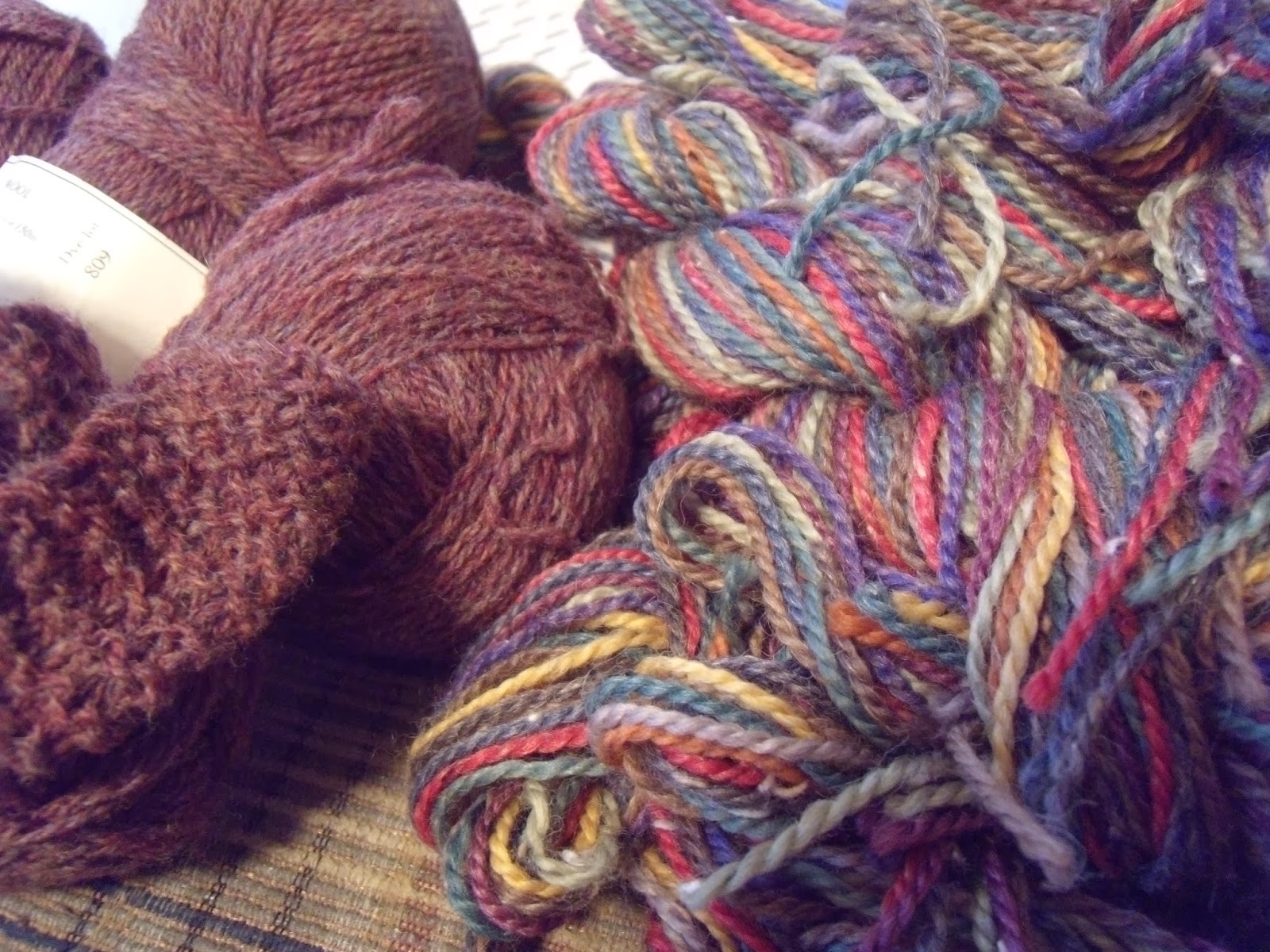 The rosy colored wool, is some Glen Gary Shetland that has been tried in countless knitting projects, but I always ended up ripping it out when the results were less than what I had intended.  The multi colored strands are from Knit Picks, City Tweed.  It was a kit for the Nonna's Flower Garden shawl, but I found the chart to difficult to read, mostly because they used colors instead of symbols.  These eyes just could not distinguish between some of the really close colors that were in the kit. I had used the City Tweed in a woven shawl, but found that I had used a sett that was way too close, and it made a really dense fabric.  I ended up taking it apart so that I could try using it again in something.  I had some of the CT yarn that was 3 yards long.  I thought that would be a good length to use for a scarf.  I didn't happen to have a warping peg on hand, but I did have a distaff handy.  I first threaded the CT thru the reed, then I tied the end  in a knot and looped it around the distaff.  I tied the loom to a heavy chair and put enough distance between the two to hold it just tight enough but not stretch the CT, it worked wonderfully!  Beaming the warp was easy, and before you know it I was weaving. 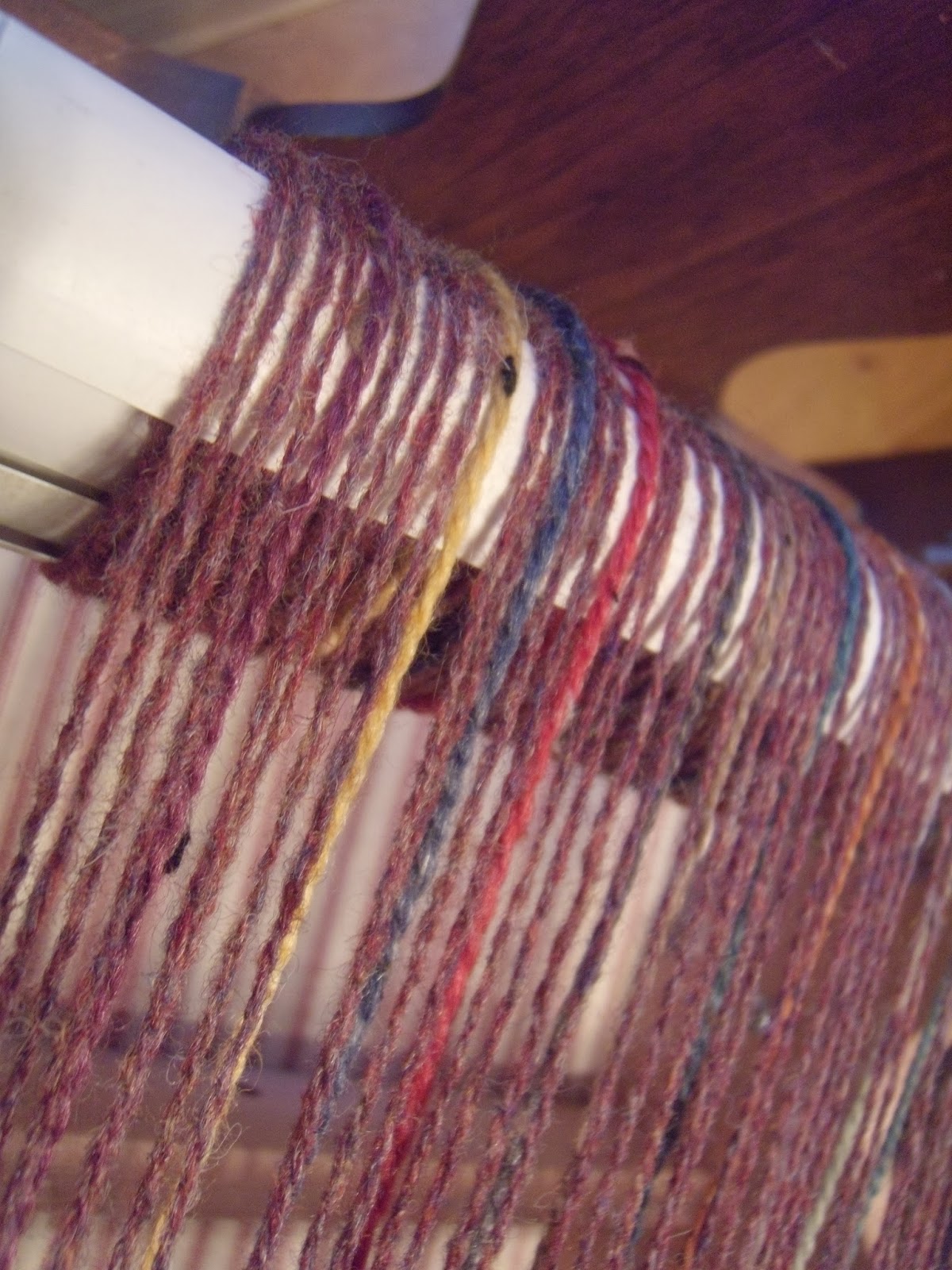 Weaving on a rigid heddle is a little different than my usual.  It is faster to warp, because you are pulling thru the heddles and reed at the same time.  (Also, I am not going to put 40 yards of warp on a RH!)  The actual weaving on a RH is faster as well.  I suppose it is because I am using much thicker yarn than I use on my floor looms.  I realized just recently another difference, with short warps and different yarns, I was not bored at all!  There is no churning out the umpteenth yard of some fabric, or the 20th baby blanket with the same design!

I somehow don't have a picture of how the weaving progressed, so I cannot even show you the scarf fresh off the loom before fulling.  The weave was pretty balanced, I tried to match the 7.5 ends per inch of the warp.  Basically, I just tapped the weft in, paying special attention to the selvedges, and making sure I had a good arc of yarn in the shed so that the edges would not draw in. 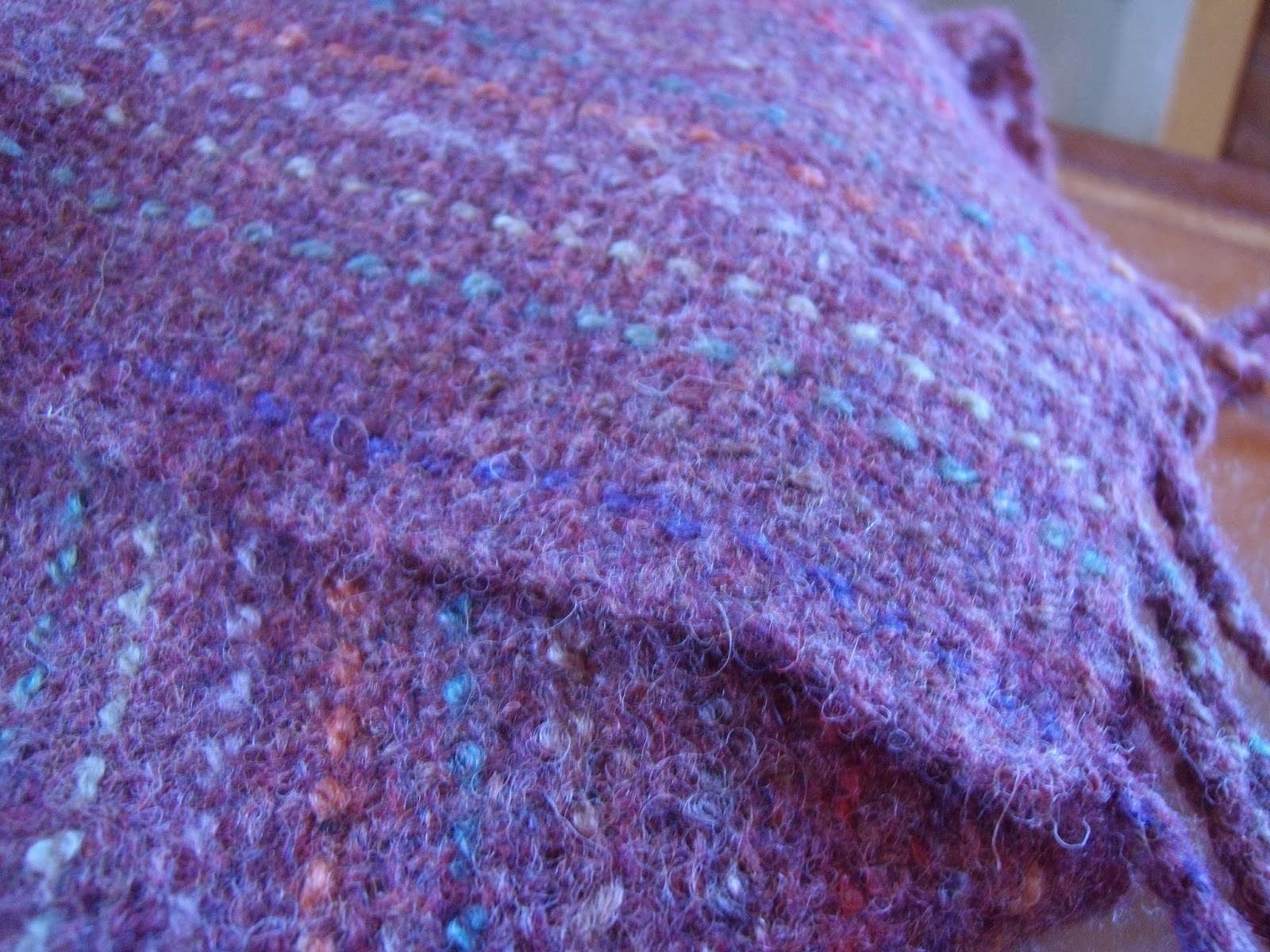 I am very pleased with the finished scarf, and once I get my own Rigid Heddle loom, you can be sure that I will be weaving many scarves, shawls and ponchos.  All from my stash of commercial and handspun yarn.

The prospect of interesting new weaving projects with my handspun  is really breathing new life into my Studio.

Until next time, Happy Spinning and Weaving, Tina

Posted by Tuesday Weavers at 10:29 AM

That wasn't really your first handwoven scarf ever, was it? It came out beautifully!

I did weave one out of bamboo now that I think of it, but this one is my first woolen scarf on a rigid heddle.

Isn't it wonderful that there are so many ways to weave? Your handspun yarn wove up very nicely!

What did you end up using for the City Tweed sett? I have some that I'd like to weave in a scarf for my daughter. Your scarf is lovely.

I used 7.5 EPI in this mixed warp. i probably would use the same sett as well, if I were to use it as the only yarn.