It was my fault!

Tuesday's blog post was not put up until Wednesday, and it is all my fault!  During lunch on Tuesday, I asked if anyone would be able to go with me to check out a spinning wheel I had seen on Craigslist.  (I never go to a Craigslist check out/pick up by myself, no one should!  You can't be too careful!)

Nobody volunteered, so Lou Ann, the trooper that she is told me that she would come with me.  I knew that the snow storms were coming the next evening so, I didn't want to delay, cause this wheel was in the mountains nearby, it would be nearly another week before we would be able to get back there. 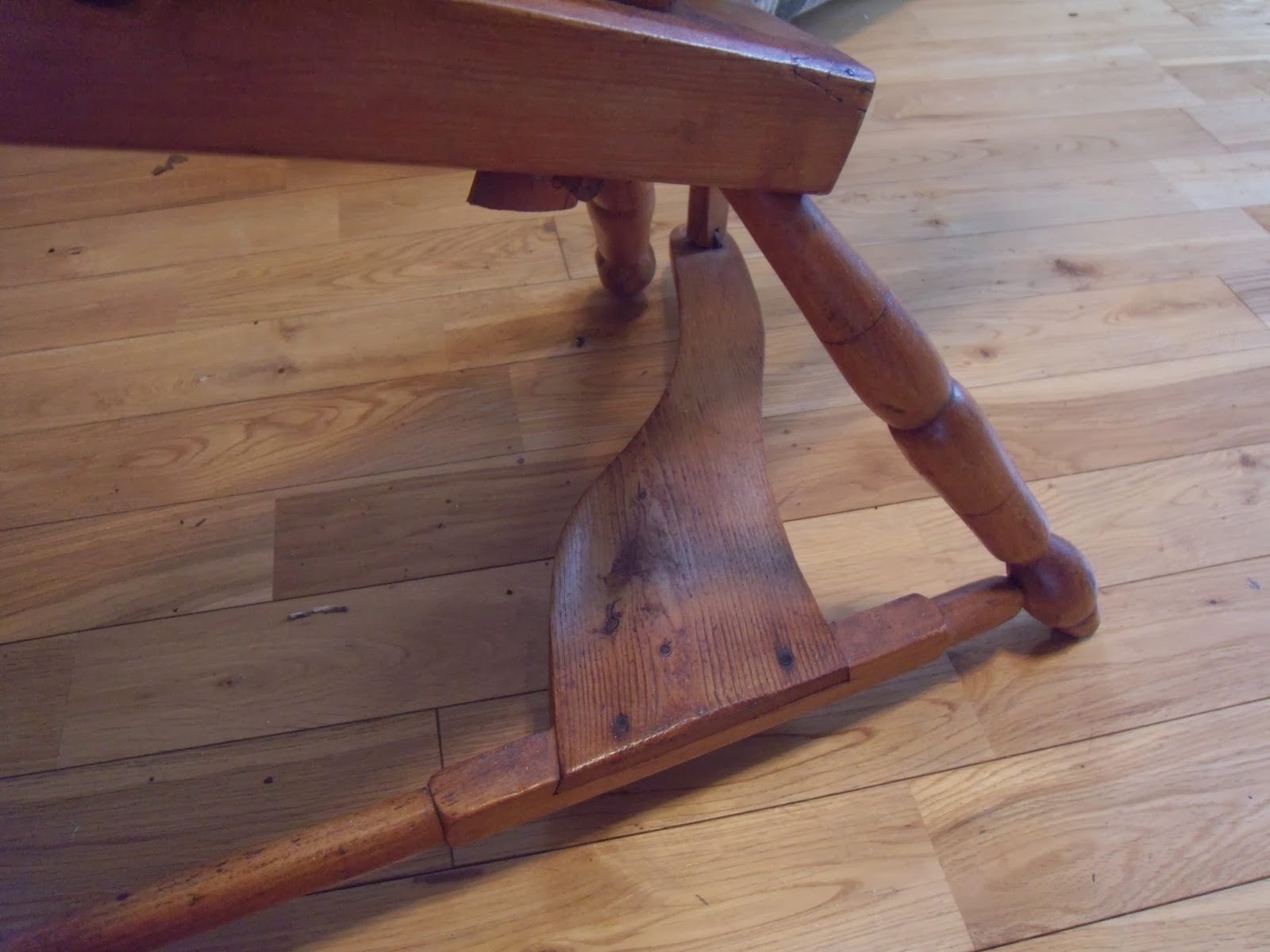 Lou Ann and I wound our way through the mountains along roads that I know pretty well, it is the same road I take when we go camping, or when we go all the way to Gatlinburg.  This time we took a road off the main road that ended up going straight up the mountain on the opposite side of the valley from the Smoky Mountains Natl. Park. 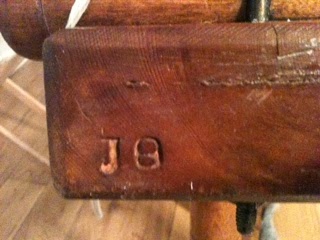 We made it all the way to the driveway, but there were 2 driveways, so I had to call to find out which one we should take.  We were there a few minutes later, and we were greeted by our hosts, Tommy and Paula.

We had the best time chatting with these two, they have been on the mountain full time for the last 12 years, though the house had been their studio for about 25 years.  It was a wonderful house with an impressive view of the Smokies.  We talked about the impending snow, and how it would affect them.  They talked about their retirement and how they liked to spend their time.  It turns out they have a habit of going to auctions in North Carolina, and picking up pretty things.  They had picked up this wheel a couple of years ago, but since neither of them spin, it hasn't been used in quite some time. 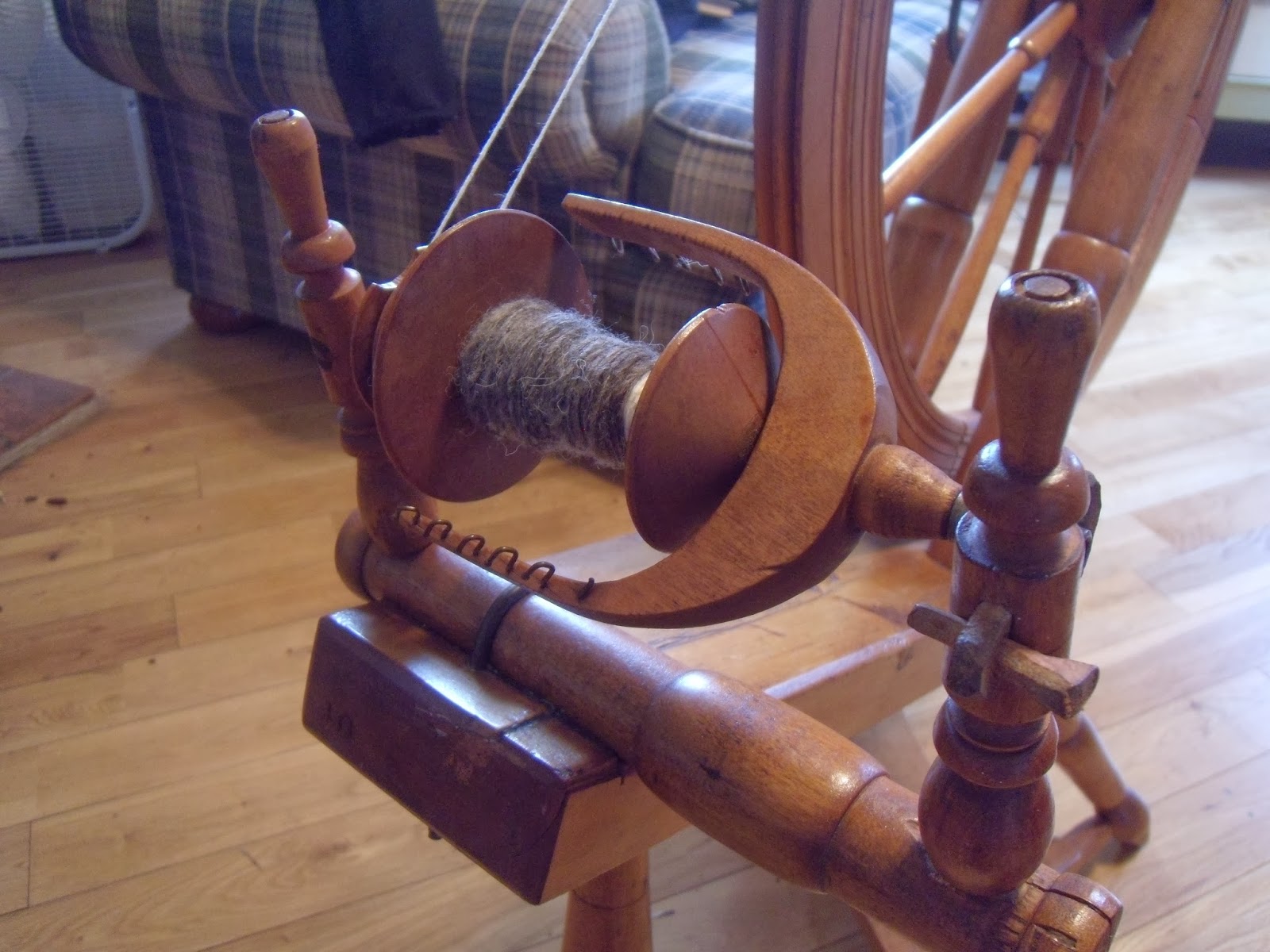 We oiled her up and I tried to get her working again.  She was a little sluggish, so I took the flyer off and we found some rust and corrosion on the mandrel.  We oiled that really well and wiped it repeatedly.  I would sand it down when I got home, (yes, I knew she was coming home with me the moment I saw her!) That little bit of cleaning helped immediately!  It wasn't perfect take up, but I knew we could take care of that later.  When Tommy and Paula saw the wheel spinning again, they dropped the already fair price to unbelievable!

The JO that you see on the first picture, tells me that this wheel was made in Canada in St. Anne de La  Pocatiere, by a wheelwright named Jeremie Ouellet, who was born in 1845.  He died in 1903, so sometime in the mid to late 1800 he made my wheel.
There are several indicators of this particular families wheels, yes several generations of them made wheels.  One of them is the u bolt that holds the "Mother of All" to the table.  With this kind of wheel the whole MOA tilts to adjust the tension on the drive band.  One of the other indicators it that lovely swoopy treadle in the first picture. 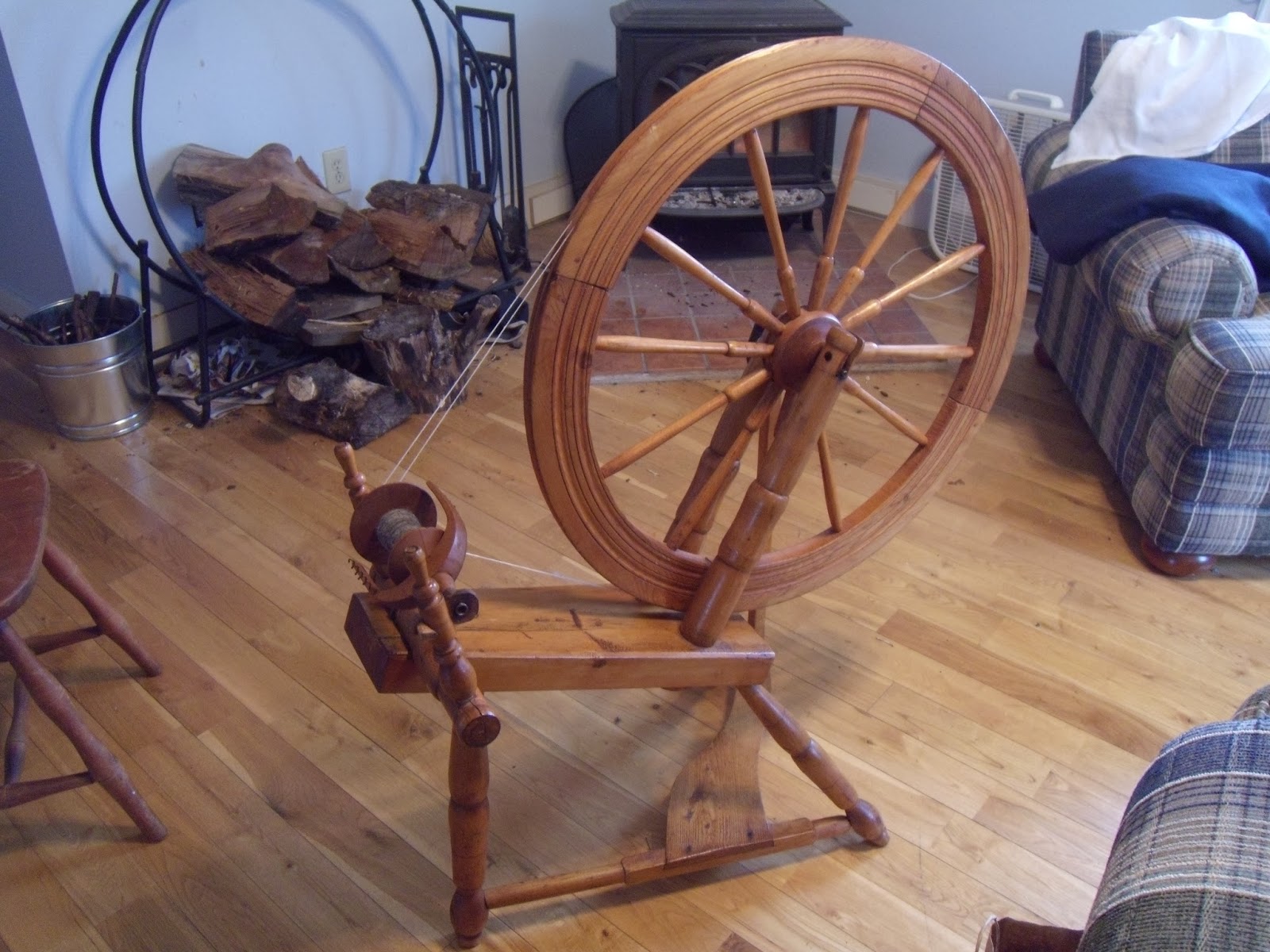 We have spent the last few days getting to know each other.  I am so pleased with this wheel, she spins so easily and quickly.  The large drive wheel has so much momentum, that it makes the treadling smooth and mesmerizing! 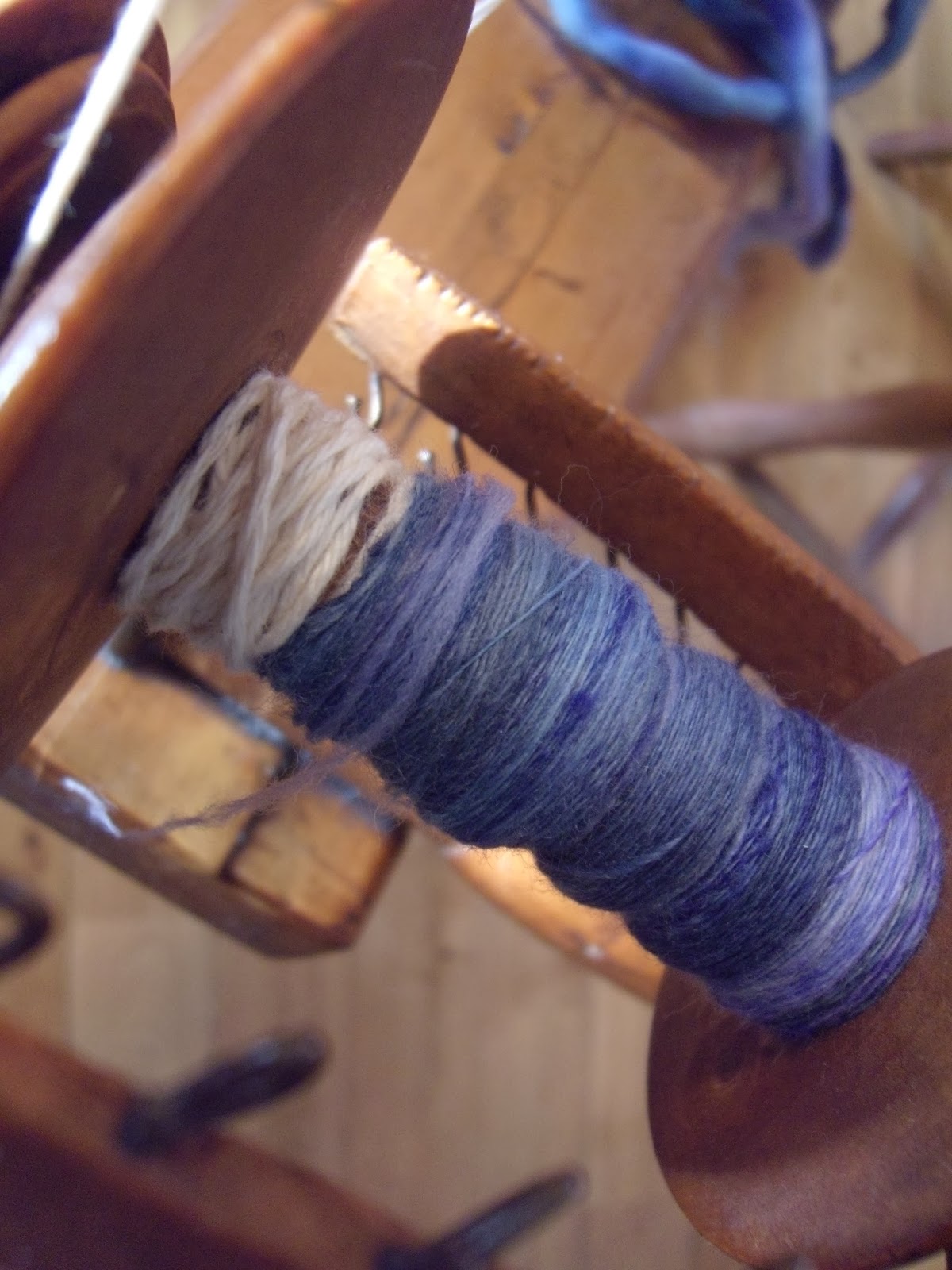 Here  is the bobbin with a little bit of Merino lace weight, the Top is Malabrigo, Nube.  The colorway is 856 Azules.  It seems like I have been spinning a lot, but it takes a long time for lace weight to fill a bobbin!

That my friends is what I have been doing,  I hope you have been having as much fun as I have! 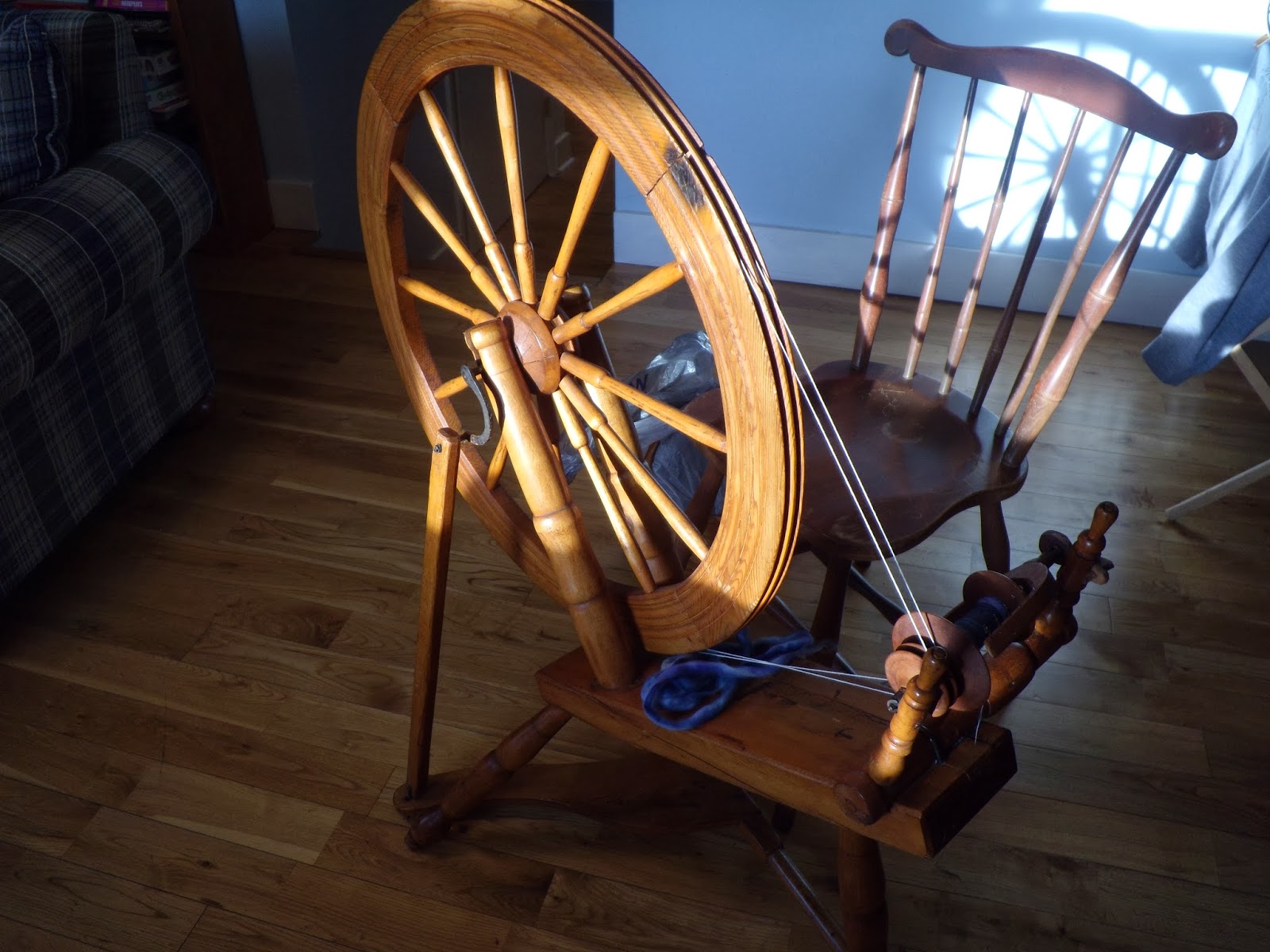 Until next time, Happy Spinning and Weaving, Tina

Posted by Tuesday Weavers at 6:23 PM

I love such old spinningwheels, wounderful, that you are spinning ist! thanks. best wishes wiebke

That blue will look lovely in a shawl....just saying!!!! That was a fun trip, and Tom and Paula were such interesting people!

Beautiful wheel. Did you find a home for the other wheel?