Remember when you were just learning to weave?  When it all seemed like a foreign language and you felt like an outsider?  Because on the surface, weaving looks easy!  Weaving looks like fun!  Just look at those raucous Tuesday Weavers!  They always have fun!
Well, as LouAnn says, we are always learning something new about weaving, even after nearly nine years.  And we usually learn from making mistakes. 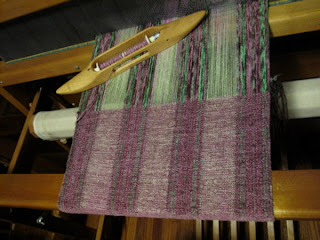 I started my first chenille warp, and really, my first "mixed" warp, using bamboo interspersed in between the chenille.  I started out trying to make the bamboo weave in huck lace and the chenille in plain weave.  Well, the chenille wanted none of that!  So, I wove the first scarf in plain weave, in just the purple chenille.  Wheeee!  How the weaving flew!  72 inches went by in no time, save the breaks for the sore foot.  I spaced between it and the new scarf, hem-stitched and wove about nine inches of just green.  Then I noticed a mistake:  two threads were next to each other, instead of plain weave skips between them.  I looked back at the purple scarf, still on the beam.  Yep, there it was!
I cut the warp off, sighed deeply about the flaw in the purple scarf and decided it would be my Secret Santa gift, given to a non-fiber person who will love it just the way it is!  It got washed up and hung to dry, and is still a little damp today, but will be lovely when pressed and fluffed up a bit. 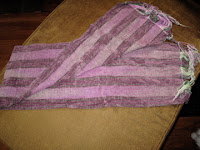 The fringe needs some attention, too, and it might entail a trip to the bead store. 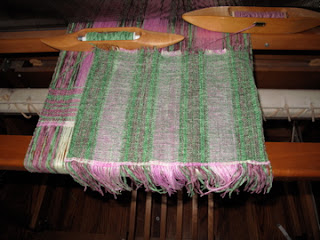 The first scarf was also quite board-like, which I think at first was just sizing, and then, due to rayon meeting water.  It's softened up quite a bit, but I decided to re-sley the reed to give the fabric nicer drape.  At left, you can see how much difference there is between a 12-dent reed I used originally and the 10-dent reed I have in there now.  Another rookie mistake?  Maybe, but I did wrap a ruler and come up with 12 epi for the chenille and 24 for the bamboo originally.  I think it was using just the chenille as weft that make it so thick.  The new sett should be nicer. 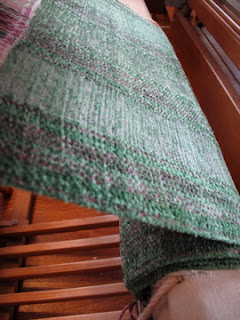 To the right is the all-green version.  I am not green's biggest fan, and when I got this green yarn in the mail, I was sad, but I really like it with the purple, as well as with the bamboo.  It's softened down in contrast, and it looks beautiful in the sunlight. 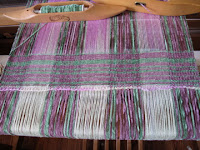 The third scarf is striped, in a blown up version of the Fibonacci series of the stripes in the warp.  Not sure I like it yet; it's certainly not as fast to weave as the solid!  But I will carry on and hope for the best!

This project has me thinking about the black and red chenilles that have been languishing in my stash.  Maybe a log cabin?  Maybe in time for Christmas?
Happy weaving, Rookies and Veterans alike!
Maggie

Posted by Tuesday Weavers at 3:29 PM

I would seem that I learn the most from my mistakes. I read about weaving, dream about weaving...but, until it goes on the loom, I'm still not sure that what I had in mind will develop. I love your scarves....I think the colors are working.

Missed you Tuesday. The scarves are looking very nice. The colors are really good together.

Any tip I give out to new weavers, I always am sure to repeat my mantra "Ask me how I know!"!!!