One of my friends has ordered  12 Hand Towels for next Summer.  She then texted me to see if I could have 2 done by the 21st.  I said yes, but I wondered if I could!  She wanted me to use the Swedish Lace napkin pattern that I have been doing on the small Leclerc, only make it longer, and that loom stood empty, waiting for a different project to be loaded, though I was waiting for the final details for that one.

For the Napkins I have been using the 100yd, 12/3, white cotton warps that I bought during the great Weavers haul a couple of years ago. (you can read all about that in the archives)  I have to put 2 warp chains together side by side to get the width I want, and I wind on as much as I can get on the back beam, then I re do the cross with a second set of lease sticks and then I tie it off and back it goes into the tub until the next time.  I finally decided that all I had to do was to wind on a little, which really goes against the grain, and then I would be able to weave it off in time.

The reason it is a pain to do such a short warp is that, with these particular warps, I cannot just tie on the old threading and wind on, they are just too sticky to do that.  So, I have to wind on and rethread each and every time.  Swedish Lace is an easy but time consuming thread, that is all there is to it!

However, once it is on the loom and threaded and tied on, the fun begins!  One Shuttle, easy treadling sequence, no temple in sight, I am in heaven.  The inches just flow, and mistakes are easy to spot and correct on the loom.  I used the same threading as my napkins but I changed up the over all pattern.  I basically did a border at each end of the towel and then a simple alternating pattern for the body of the towel.

I also wove it in RED!  I love this towel!  If my customer approves these towels, I believe I will load the loom in January, and put that other project, in waiting, on the rug loom where it will do just fine, I only really need the 2 harnesses anyway! 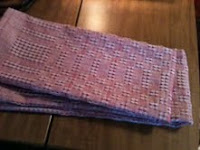 Posted by Tuesday Weavers at 9:04 AM

Those 100 yard warps have been put to such good use!!! I love that subtle pattern on the red cloths...lace IS fun to weave!

That is pretty with the red! I hope she likes them!

I like that towel also. Very nice. She will love them.