I have almost finished weaving the "Cat Tracks and Snail Trails" Baby blanket warp.  I have probably woven close to 20 blankets using this pattern.  That is why I was confused when I was perusing a "newer" copy of Marguerite Davison's "Handweaver's Pattern Book"!  Her pattern, on page 166, was different than the one that I had been using!  Both the threading and treading were different!  I had just recently traded out my older copy for this newer one, so I thought that maybe they had changed the pattern or something. 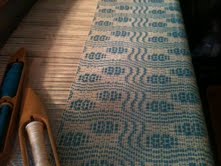 I mentioned it to Lou Ann yesterday when we were on our way back from Gatlinburg, I explained what the differences were, and she said that she would check her copy, but, her copy, that is several years older than my book, was exactly the same as mine!

Since she was already going to run by the Center on Thursday, she said that she would check their copies to see if she could see anything close to what I had been using.

The biggest difference that I have noted between my blankets and the book draw down is that I have been using only 1 pattern pick in the twill run, where the books all say to do 3 pattern picks!  The Cat Paws are also beefier than mine are, using up to 6 pattern pics, where I had been using 3 max!

On Thursday, as it turned out, I needed to make a trip really close to the Center.  So, I decided to see for myself if the copies there were any different.  They were the same as my present copy!  While I was there, however, I ran across another of Mrs. Davison's books.  It was one I hadn't seen before. 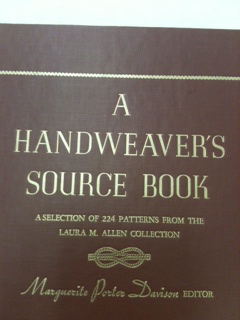 (Lou Ann told me that it has been there all along, I was just unaware of it.)  In this wonderful book, I found several variations on the CTST theme.  I snapped a picture of several of them, but nothing resembled what I had been doing for the last year and a half.

This one is called "Snow Drops and Snail Trails".

This is her "Winding Stairs"  with the "Paws" treadled star fashion, and the "Vine" is using 2 pattern pics instead of my 1.

and finally "Wandering Vine", again the "Cat Paws" are treadled star fashion, and the "Trails" are with 2 pattern pics, instead of my one.  It was a fun diversion, but it still didn't answer my question.  Where in the world did I find my version, I know I did not make it up!


Then I got a call from Lou Ann, who was just as intrigued as I was.  As we were talking, she was rifling through her printouts from the Arizona State archives, that deals with miniature overshot patterns.  She had remembered that we did CTST mug rugs first, before I took it to the big loom.   We thought that she had found the answer, but, the pattern wasn't in either of the booklets!

She told me that she would not rest until she solved the riddle!  She didn't rest either, it was about an hour later that she sent me a message.  "Solved....my miniature patterns from the Atwater Recipe Book.  Yeah!!!!!!!

Sure enough, that is the pattern we used for the  mug rugs, and I just didn't consult the books for a full sized version!  I like the pattern I am using, but I am going to compare the 2 patterns closely, both the threading and the treadling, to see just how different they are.  I may be able to just use the new treadling, or some version and leave the threading be.  Since I had planned on tying on a short warp left over from the Leclerc, and pulling it back through using the threading that is in place, I hope that is the case.  I also, hope I have enough on the loom after this last blanket, to play with the treadling before I tie on the short one.

I am also interested in some of these other versions I found, in the second Davison book, I think I will have to check it out on tuesday for a little study time.  Who knows, I may use one of them, though I do love the CTST pattern for Baby blankets, it just seems right.

It is a good thing that I like all of the process, from planning to finishing, isn't it!  Throw in a little mystery and I am over the top!

Posted by Tuesday Weavers at 7:25 AM

I still have those books stacked here on the bench...go ahead...ask me another question!!!! I seem to be going to Atwater a lot these days. The Recipe book is GOLD!!!

You're blanket looks wonderful! I am so envious of the size of that loom that can do blankets! Maybe someday I can get one, too!

Amanda, I can do a baby blanket, but for something full size, I have even panels and sewn them together!