Anatomy of a Donation

I know someone who sews drapery for others. She ends up with the bits of fabric that are left over after sewing the items for people. In an attempt to find some space in her studio, she gave me some boxes of things she wasn't needing anymore. 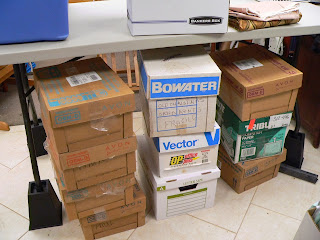 Like fabric samples for drapery from about 1995. Remember those gorgeous flowers? So, just imagine the samples sewn together to make a duvet cover for someone? Or, sewn together and made into cushions? I guess you could make curtains with them, just sew together to the right size, line and hang up. Possibilities..... 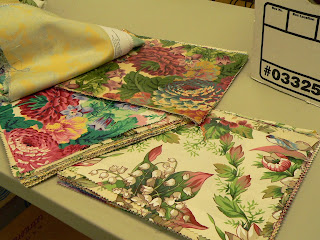 That was the first box. The second box had some pieces of heavy upholstery velvet. Too thick to cut for rugs but perfect for backs of cushions...and the bottom piece would cover the seat of a chair, right? 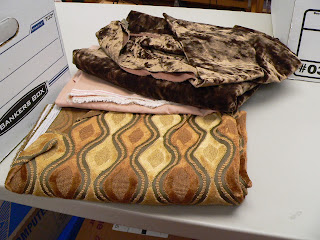 Oooh, a box of flannel. Yeah, could cut and weave that into placemats or rugs. But, how about make some into receiving blankets, embroider the corner to personalize them or cut into squares like you sometimes do denim and sew together and fringe cut the raw edges to make a throw for a teenager's bed? Again, possibilities... 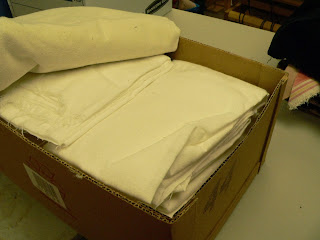 Just a sample from another box. That bright shrimp fabric? The white on it is embroidered, not printed on. 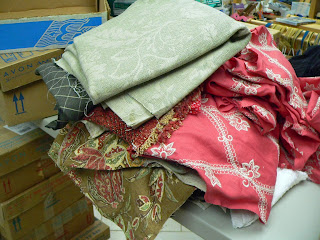 The piece on top is so calm. Much too cool to put in a rug. It's awesome for a chair seat cover, in my humble opinion. 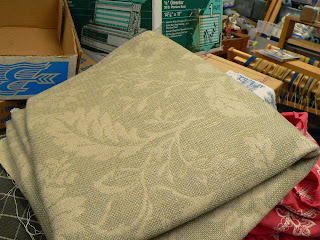 Just a peek into another box. 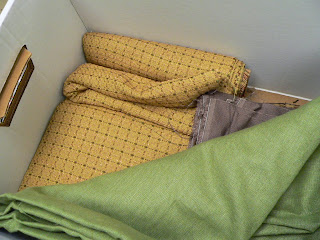 There are about 5 boxes in my van that will go to the center tomorrow. I don't think all the fabric will end up in rugs. I think some of it is going to find its way into tote bags and other things that someone will think of doing.
We get donations off and on and love to go through it. This one was a treasure mine of interesting things. Our job is to make sure that the fabrics go to someone who will use and enjoy it. Nothing like opening a box, not knowing what's in it, and then just being totally inspired to try something new or figure out a way to show off a piece of fabric that isn't wanted for  its original purpose but still has so much potential. The fun is trying to figure out how to make it all work out, especially if the piece of fabric isn't quite big enough or wide enough for what you had thought of using it for. Might have to add a bit or change something to make it work.
Now, too, it's crunch time for making gifts for Christmas. I have a loom with a warp on it for handtowels. That warp's been on there for a long time. My goal is to weave on it this week so I can post some pictures of it next Monday. Those handtowels are slated to be gifts for friends and family for Christmas!! Two looms have placemats on them right now. The other goal for me is to have the warps at least partly woven on by next week so I can take pictures to post of them as well!!
Guess I'll be busy!!
Until next week, keep weaving.
Carol
Posted by Tuesday Weavers at 9:57 AM

You have a lot of great fabric to feed those creative ideas!!!!

I'll say you'll be busy! What a treasure trove of fun stuff in those donations box and well, they will become useful instead of adding to the land fills. A win win situation.
Happy holiday weaving to all. Oh my and it's TUESDAY!