Looking at my pictures I've posted, the rugs look so simple and complete. When you're faced with a pile of selvedges in different colors and you're not sure what you're going to put together, it sure isn't!
I did know I wanted a black warp for this last batch of rugs. Black on the ends would work and you don't really see the warp the rest of the time. The fluffy selvedges take over the whole color scheme. 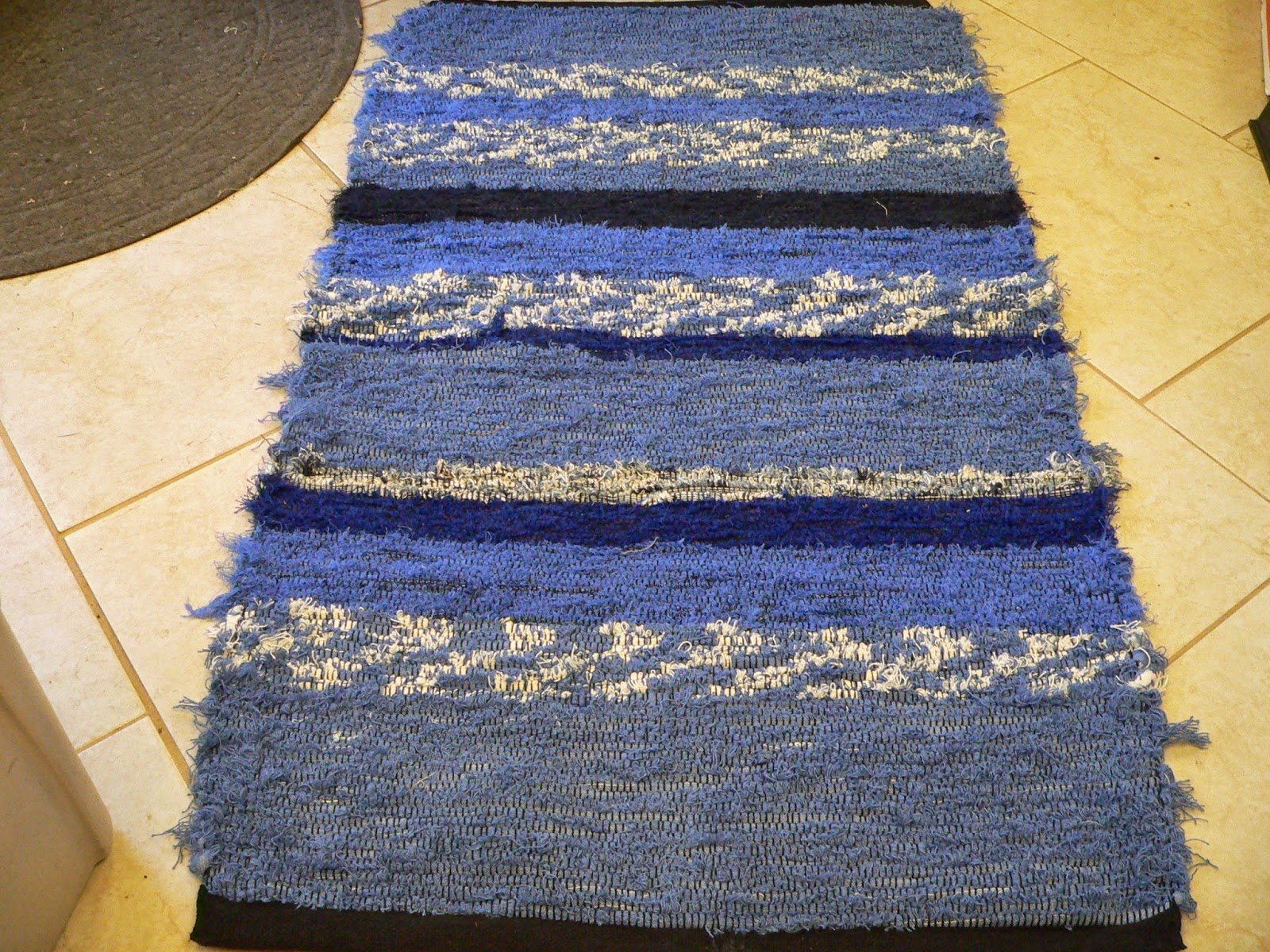 It's interesting how adding a whiter batch of selvedges to the blue brightened the rug whereas adding more somber tones made the second rug more serious in tone. 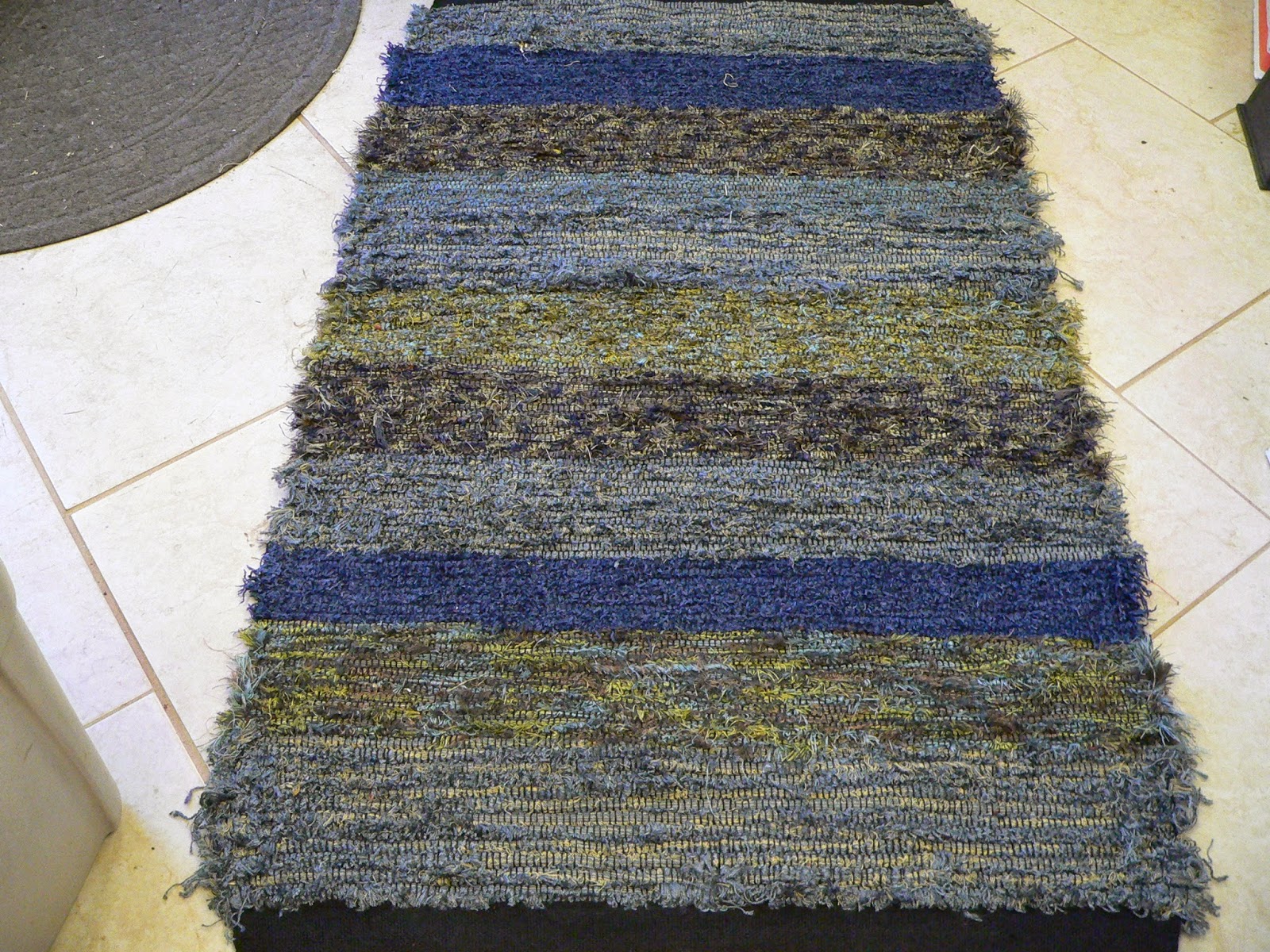 I love this red/orange rug. It's a very vibrant rug, much more so than this picture shows. I almost kept it....almost! 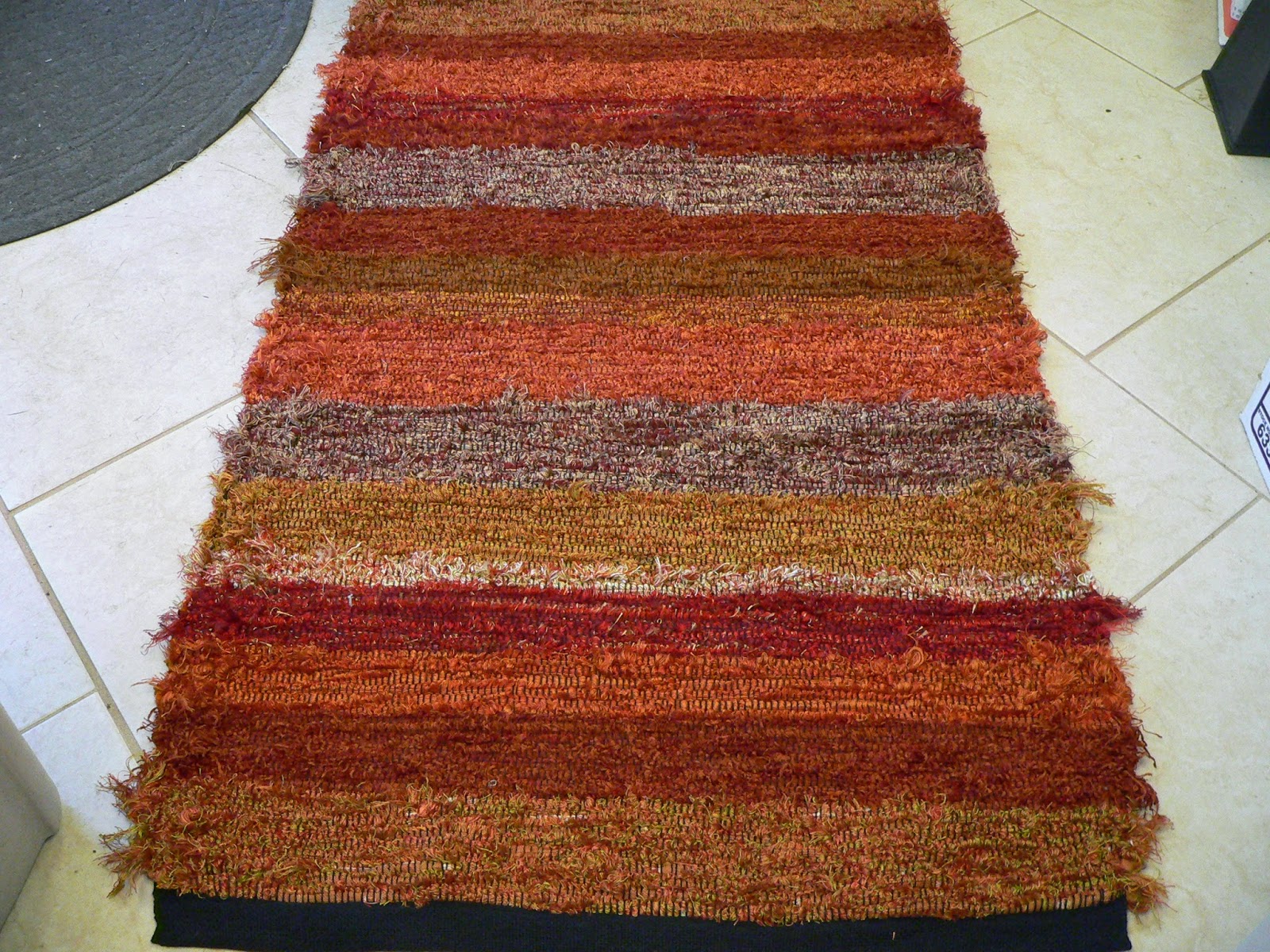 More toned down orange/green tones but with an accent of bright orange to give the rug a bit of spark. 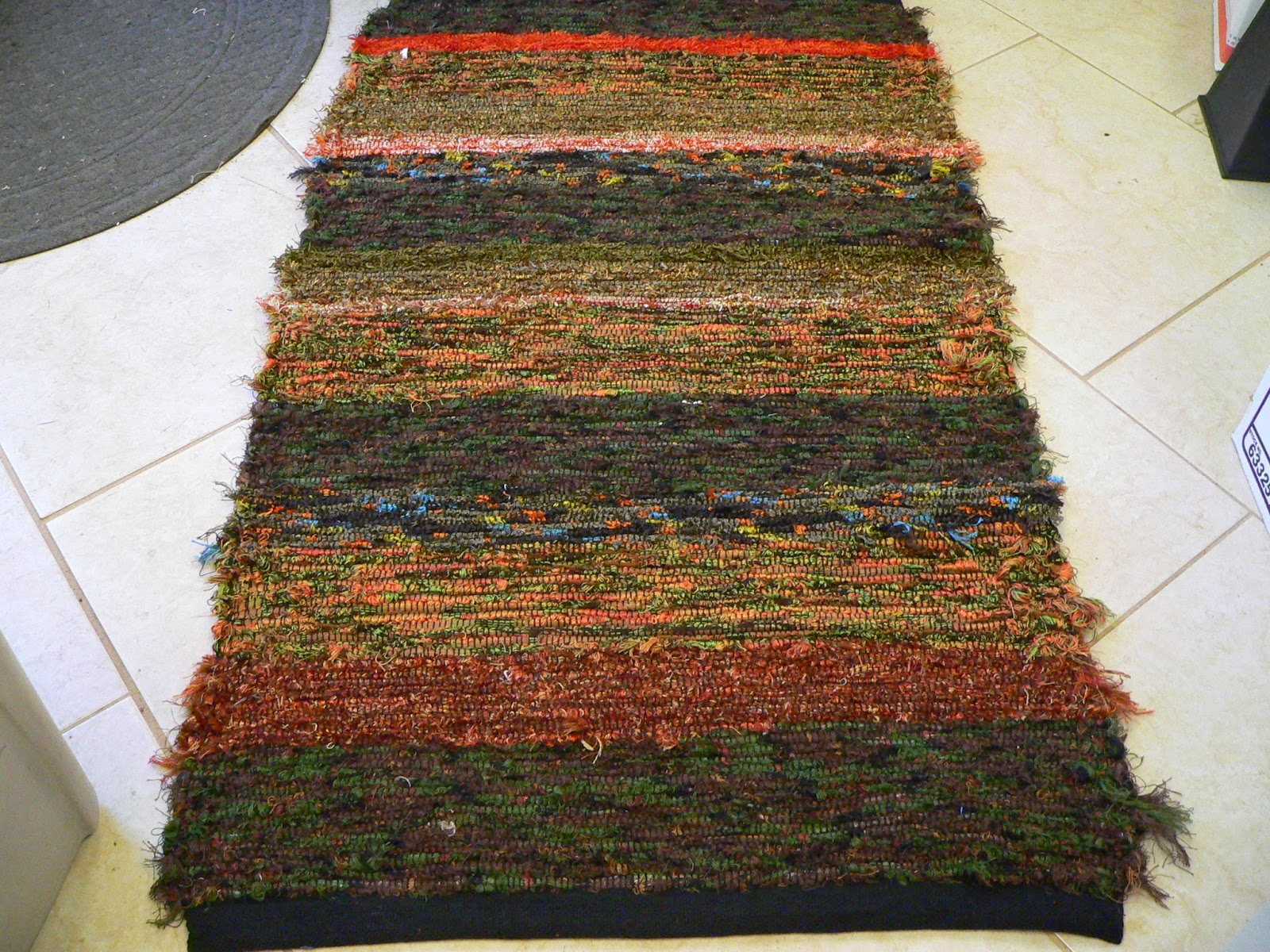 Bring out more greens and blues.... 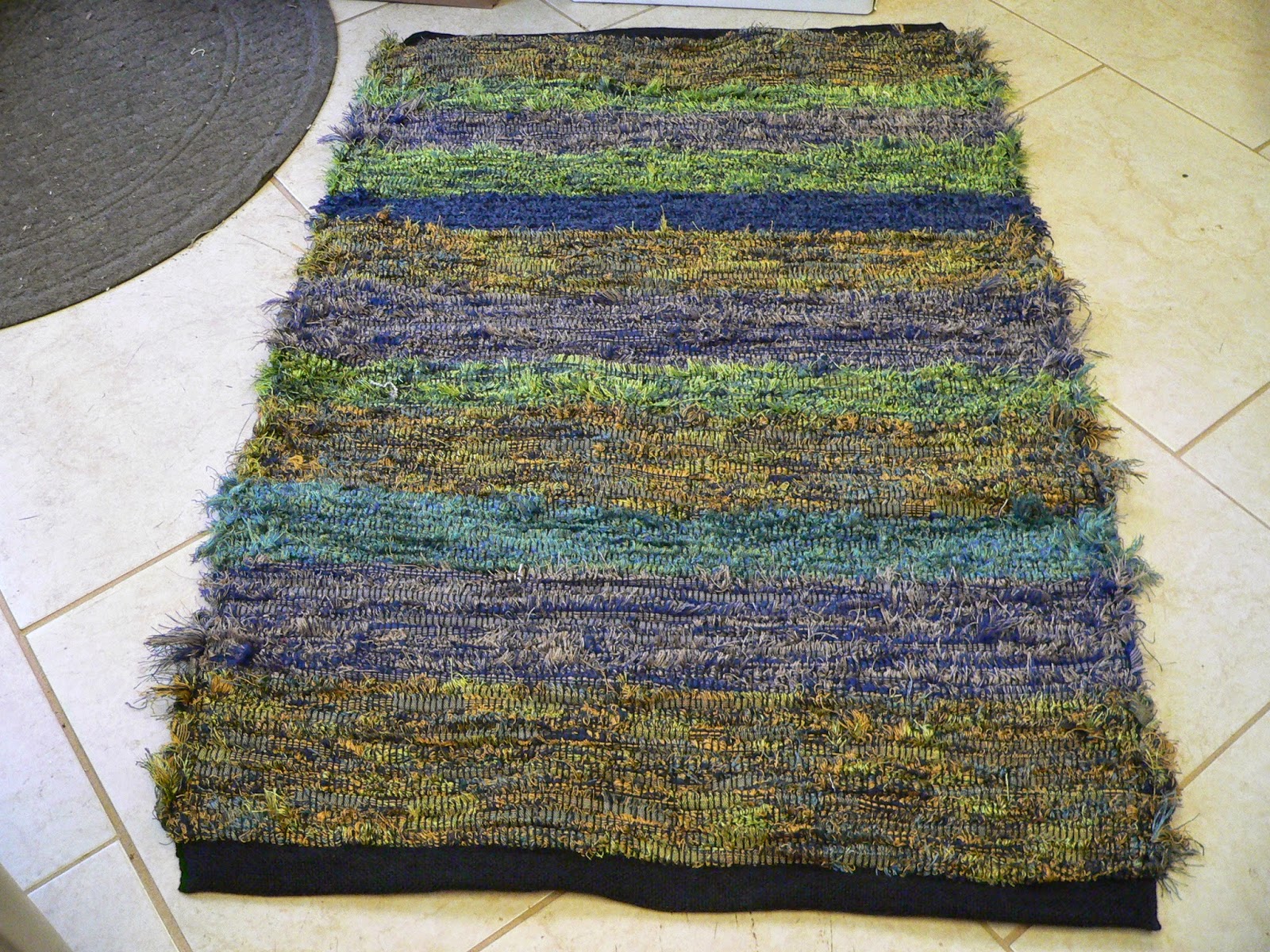 and aquas. This rug was more planned in the progression of stripes. The other rugs were planned as I went. Using, again, 4 or 5 different combinations of selvedges, as long as there was a bit of balance from one end to the other, I just went with it in weaving the balls of selvedge. 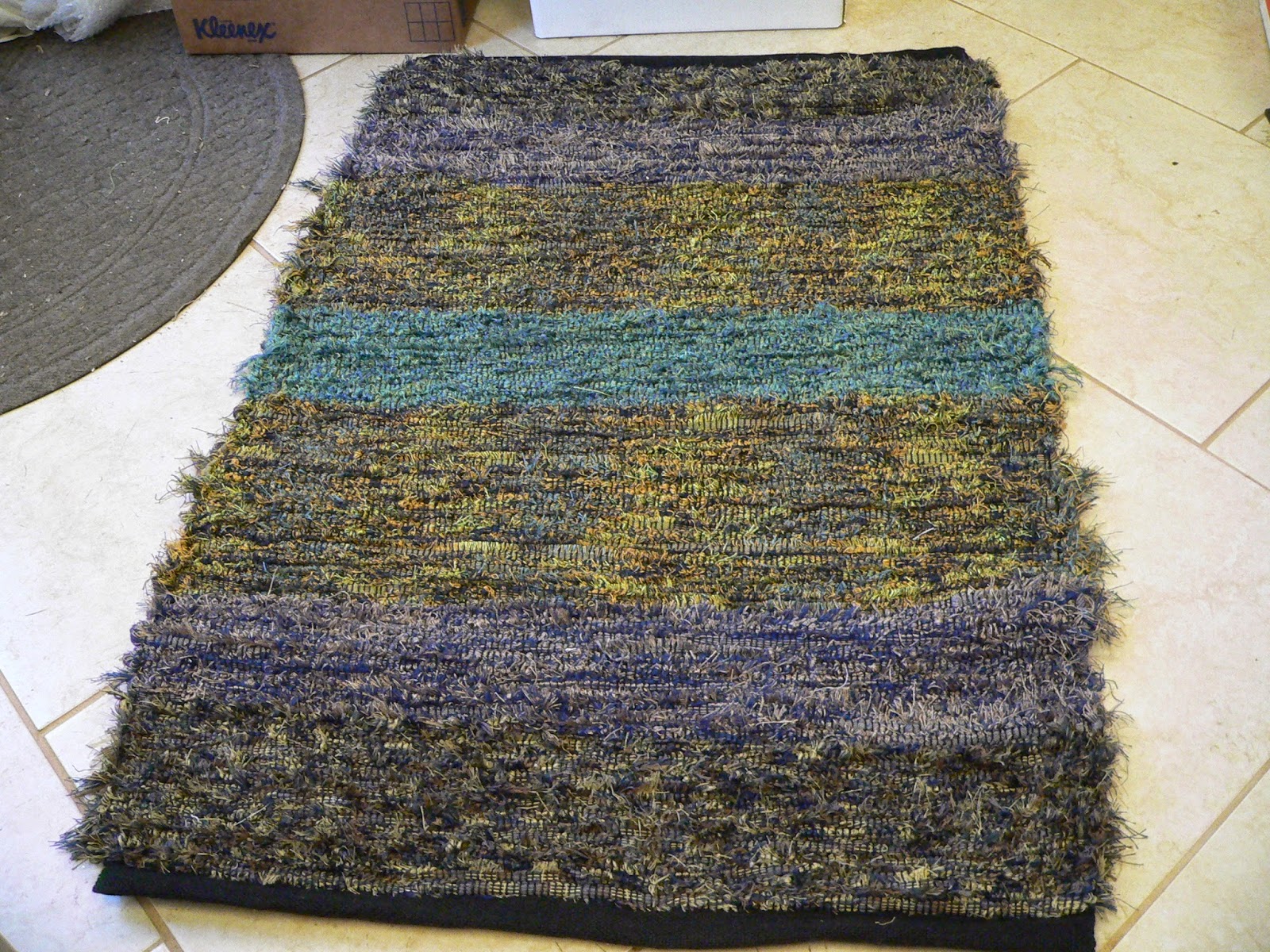 I had a fair amount of this variegated red/tan/brown. I liked how it looked by itself and there are actually 2 rugs like this. I have a small amount left for next time but not enough for a third rug. So it'll go with other colors later. 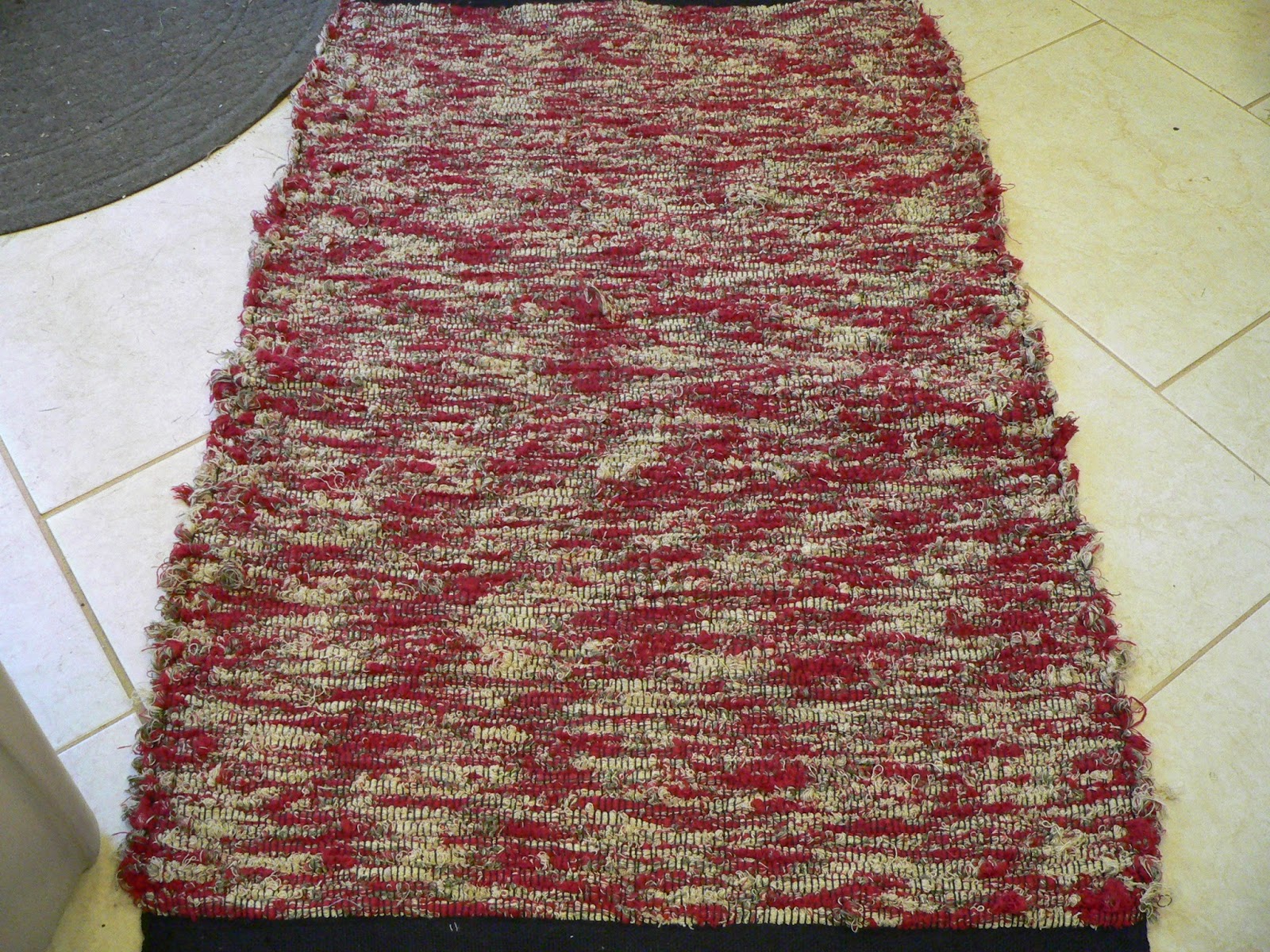 I packed up all the rest of it and there's enough for another set or two of rugs. Hopefully I'll be weaving more later this year, depending on how many sell at the shop they're at.
Thankfully, I'm now back to my regular production and rhythmically throwing the shuttle. Rug weaving has nothing rhythmic about it. You plod along, with the thick weft, creating a nice thick rug that will be nice to walk on. Weaving yardage is more relaxing, just back and forth movements of the shuttle.
On a side note, we scheduled a dye day for this past week. We set up Wednesday afternoon, after the quilters left and a couple of people who couldn't make it Thursday got their projects done. Then we were there Thursday from 9am til about 4:30pm getting our own and the Tuesday Weavers projects dyed. We had several new people join us and I think everyone had a blast!
I spent Saturday rinsing and rinsing and rinsing. They're all hanging up to dry now...
Until next week, keep weaving!
Carol
Posted by Tuesday Weavers at 10:30 AM

Your rugs look so thick, soft and warm, great job!

I'm sure the rugs will do well in your booth! And, I'm glad dye day was fun for all!

Lovely plush sturdy looking rugs. My hats off to you. I can't stand making rugs, but it surely makes me appreciate those that do. I bet they go like hotcakes!