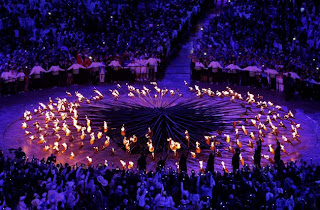 ....I love to watch the opening of the Olympics.

I love to see what each host nation highlights in their special program.

I love all the special effects that they use to tell their story.

I actually was holding my breath as the pods for the cauldron started to rise up on the floor. 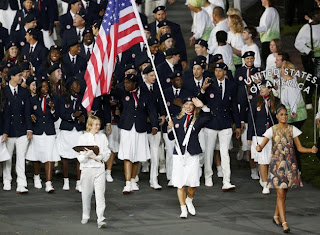 And, I catch myself cheering as the USA athletes step into view in the stadium.

Late yesterday afternoon, I got an email from Maggie about knitting during the opening ceremony of the Olympics.  I don't knit.
But, I did have a warp I wanted to throw on the Wolf Pup for a scarf using my art yarn as an accent in the warp.  (I've had this germ of an idea rattling around in my head for awhile!)
OK....so winding a warp while watching Danny Boyle's production is not the smartest thing I've ever done.  After a major screw-up, I pulled the thread and went to a different location. 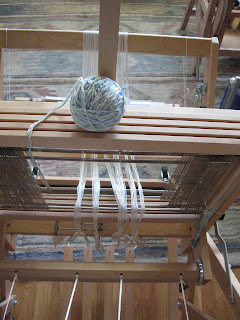 The warp got wound and beamed onto Parker Pup.  I've finally decided where I want to put the art yarn...there will be five strands in this scarf.

Time will tell if all my plotting and planning will pay off.  This will be a quickie project since I've got to get this loom warped for the August class at the Center. 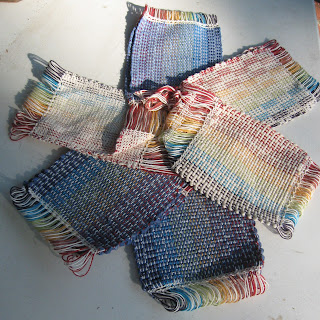 And, these are the twelve mug rugs that were cut off the Pup.  This was the log cabin warp that got interrupted by spinning!!!!  You gotta love log cabin....so much fun!!!

So....for today, while I watch some more Olympic events, there should be a scarf that gets threaded and the weaving will begin.

I won't win a medal....but I will have tried a new technique (for me.)

Happy Weaving!!!
LouAnn
Posted by Tuesday Weavers at 10:23 AM

I watched some of the opening ceremony, too, but I went to bed when the teams were coming in. I pooped out when they were still in the C's.

Go for the gold LouAnn! Can't wait to see what this warp does!

You will need to bring the scarf to the center for show and tell. Can't wait to see it.

Another Olympic fan here too. I stayed up for the whole thing, except for that part my eyes closed, but just for a bit. I think it's always interesting how each country decides and executes it's chosen theme for the games.
Have fun with your Pup warp!

You are SO ambitious! I would never try and watch TV while threading a tricky warp. Bravo! Can't wait to see hoe the scarf comes out. Good luck!

Watched the Olympic opening too..but wouldn't dare try to dress the pup, you are a brave one.
Can't wait to see your art scarf, hope to see it Tuesday. Sharen

I love the way the colors play together in the mug rugs!!

Yeah, I only made it to the C's, too, but the ceremony was fun to watch, kinda bizarre. I had to reverse knit a little during it!