In praise of a truck.

What a beautiful day today was, spring like sunshine and warmth!  It was a perfect day to pick up a couple of bales of hay for the goats, and a loom that was coming back home. 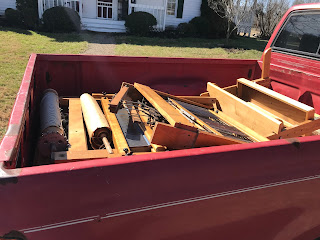 I love having a truck, it is sooooo handy!  I did use my little CRV to pick up the loom, but I had to switch vehicles with my Hubby half way home.  It was easy to do, open up the doors and all hands moved the parts and pieces from one vehicle to the other. 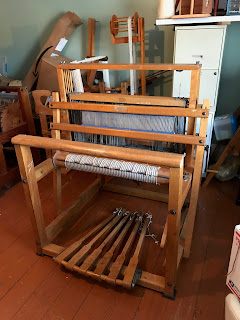 I had planned to take the loom pieces up to the studio and leave them unassembled until I got all of the fleeces washed and out of the way.  I found however, that this loom in pieces was more in the way than this loom put together. 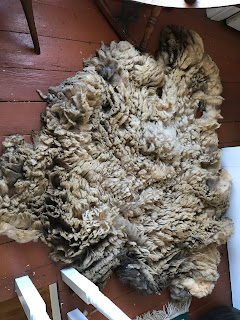 I still had to go get hay, but I thought that  I could get a fleece washed while I was taking the loom upstairs and put together. ( This is Jacobs fleece #01-13, it is mostly white with splashes of grey, and so very soft!)  I grabbed a quick lunch and then set to work.


I finished all the fleece washing and loom putting together by 4pm, just enough time left to hop into the handy truck and get to the co-op for some much needed hay.  Back home, I got the hay unloaded while the goats ate their rations.


I only have 2 more large fleeces, (I used that little truck to pick up all those fleeces too!  There would never have been enough room in the CRV!)  unless there is a big one hiding among the 18 lamb fleeces.  I feel like when I get these last two big ones done, I will have hit a milestone.   I continue to vacuum pack the dry fleeces as small as I can get them, and  I have found that even if the vacuum doesn't hold it is still a much smaller package than before.

I don't know what I would do without my truck!

Posted by Tuesday Weavers at 7:03 PM

Yeah! You got all of that done before the rain set in! I do think you should put those rakes on Alice....she'll be a great workhorse!